Here’s a sneak peek at how Sailor Kobe No. 37 Island Blue looks in a broader nib. We’ve already seen it in a Kaweco extra-fine. But I’ve got it in second pen now, a Lamy Safari with 1.1 mm stub nib.

Here’s Island Blue from the Safari stub on Tomoe River paper, with the Kaweco extra-fine below.

And this is Island Blue on Rhodia paper, with the extra-fine nib first, then the wider stub. 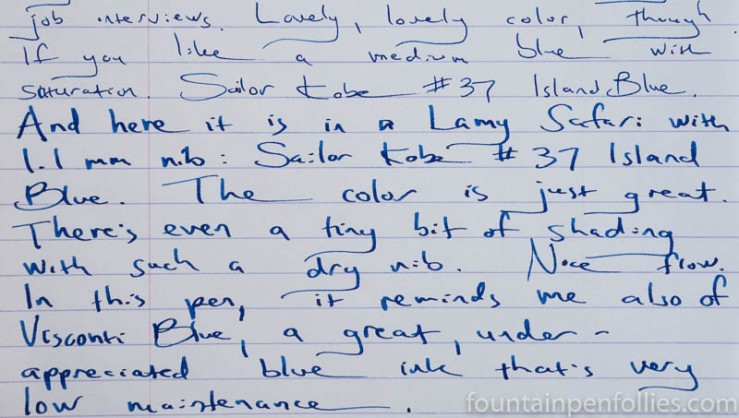 It wasn’t until I saw a wider swath of Island Blue that I realized something cool. Even more than the lovely Diamine Blue Velvet, Kobe Island Blue reminds me of the equally lovely, but criminally underappreciated Visconti Blue.

I haven’t blogged about Visconti Blue, despite really liking it. Visconti Blue is a lower-maintenance blue ink that’s more vivacious than older standards like Waterman Serenity Blue, but without the ultra-brightness of some of the newer inks like Blue Velvet.

So here are swabs of Island Blue with the two inks it reminds me of. 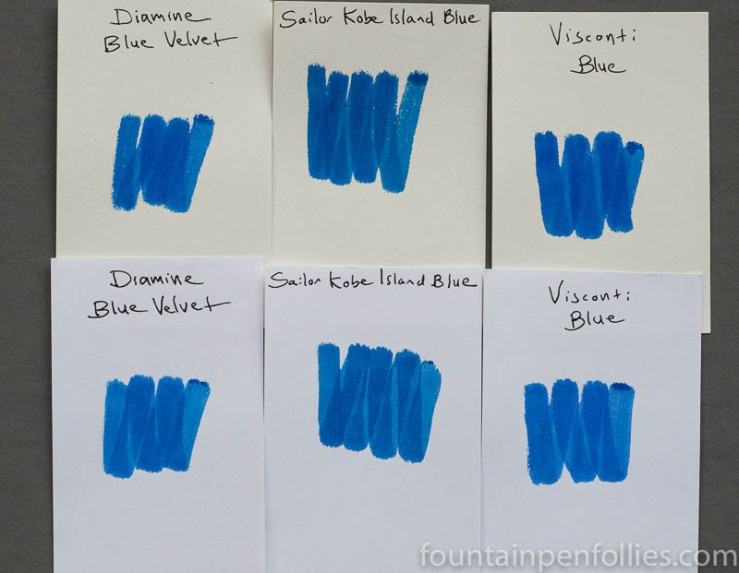 Bear in mind that photos of the swabs alone can deceive. Blue Velvet is brighter than the other two, which you can see in person but not in the photo. And I think I remember that Visconti Blue shades more than Island Blue. Then of course there are important issues of sheen, water resistance, cleanup and the like, which we’ll delve into in the longer, official review.