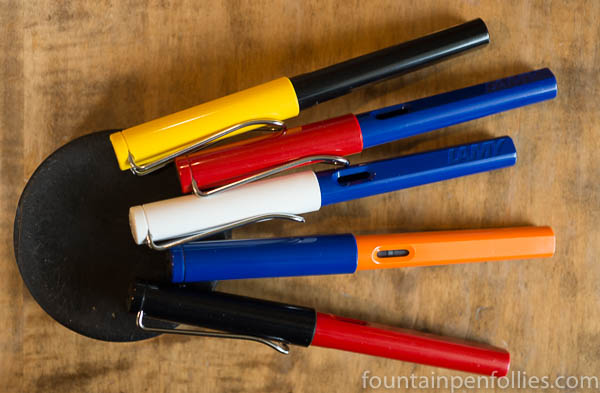 Finally! The Most Wonderful Time of the Year! After an endless summer of no hockey, tonight we finally drop the puck and welcome the new season of NHL Hockey. Which means another chance to play a game I like to call “Lamy Safari Your Team.”

The 2019 year’s hockey season dawns wet and drear in Chicago, and the Chicago Blackhawks aren’t even on this continent, since the NHL sent them to start the season in Prague. That combination of factors has me low-keying the Hockey Lamy Safaris this year, and keeping it simple.

First and foremost is the Chicago Blackhawks Lamy Safari, this time a simple red Safari with black cap. That’s the only one I’ll ink, with a black ink and a fine nib.

Blue and white for the Toronto Maple Leafs and Tampa Bay Lightning, two favorites to win the Cup. Blue and red for the Montreal Canadiens and New York Rangers, two Original Six Teams I like, but also not likely to seriously threaten. Yellow and black for the Pittsburgh Penguins and also the team that’s my pick to win it all this year, the Boston Bruins. Orange and blue for the Edmonton Oilers and New York Islanders, longshots this year, like the Blackhawks, but teams I’ve rooted for since I was a kid. I would have put an orange and black Safari out there, in honor of the Philadelphia Flyers mascot, Gritty, but we’re playing the Flyers in Game 1. I’ll do that for Halloween, in Lamy Safari Your Holiday.

Lots of the newer teams have fancier colors (because the good colors were taken). So, it does seem that Lamy might look at making some future Safaris in burgundy, dark green, middle green and, above all, gold. I wouldn’t have guessed, but gold and burgundy seem to be the two most popular team colors without a matching Safari. And it’s just not as satisfying to “Lamy Al-Star Your Team.” Safari all the way.