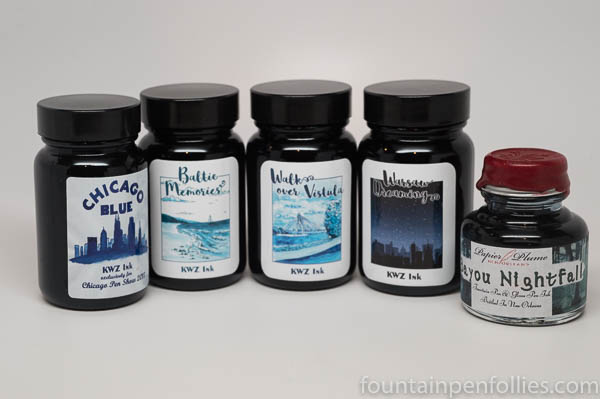 Here are my five favorite inks from 2017:

This was a very easy list to compile. I looked through everything I’d tried this year, and these were the obvious standouts. These five inks made the biggest impression on me. On a scale of one-to-ten, these go to 11. One became one of the inks I use most.

Baltic Memories, in contrast … this ink does grab your attention. It walks onstage and starts singing. It is super sheeny. It is dynamic. You will notice it.

Walk Over Vistula sort of snuck onto this list, because it seemed inseparable from the other two KWZ inks released at the same time. I think of the KWZ trio together. But Walk Over Vistula deserves its spot. It’s a bridge between the quieter inks on this list, and the bravura Baltic Memories.

Chicago Blue is a super-solid everyday blue ink. Which isn’t to suggest that it’s dull, just that it’s so good you may not notice how good. It’s the Tom Hanks of ink. Oh, it’s got sheen, if you like that, and saturation. But it’s also easy-to-clean and behaves in all my pens. It was my most-used ink this year, along with old standby Pelikan Brilliant Black.

All of the inks on my favorites list came out in 2017. But there were other 2017 inks I loved, as well as older inks I didn’t try until 2017. Here are ten that were also particularly good, in my view — my 2017 Honorable Mentions:

I’d love to hear other people’s favorites. Maybe I can try them in 2018.