That’s the song “Red Beans” from the late, great Professor Longhair of New Orleans, which is what I used to think of when I thought of red beans and rice. (Also, yum.)

And now I also think of ink. The classic Creole dish red beans and rice is the inspiration for the newest ink from Papier Plume of New Orleans. It’s going to be part of Papier Plume’s New Orleans Collection of inks, which I briefly reviewed here. I haven’t been using much else since I got these inks, honestly.

Here is the baby of the family. 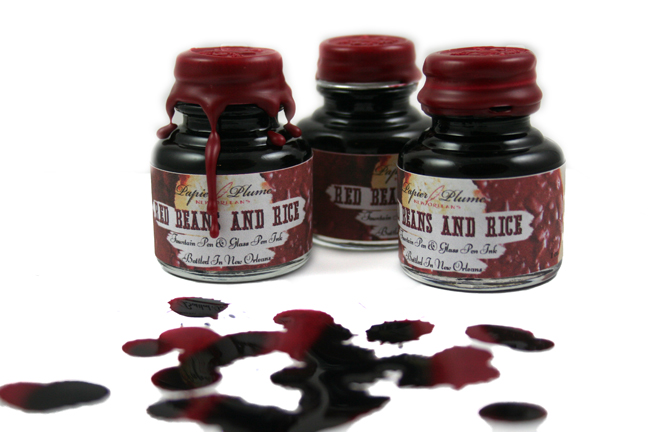 I’ve had a tester bottle of  Red Beans and Rice since early June, so I’ve been lucky enough to put the ink through its paces for nearly a month. Verdict: delicious! It’s a very attractive burgundy ink with an nearly irresistible name. It really does remind me of red beans and rice, too.

As a darker color, Red Beans and Rice makes a nice addition to the other five New Orleans collection inks, which are more summery. Red Beans and Rice is a good strong color, and warm. It has nice shading and the color is both legible and engaging. Best of all, it can give a different look in different pens.

I’ll put up a more detailed review before the Fourth. Papier Plume will be debuting the ink on July 14. The first batch will be available from Papier Plume online and at the Miami Pen Show both.

I would point out that it took a lot of willpower for me not to slip into this post the sentence “Red Beans and Rice is extra nice.” But if you’re a regular reader, you know that willpower is a great strength of mine. Nor did I call myself “a secret agent of ink.” Even though it’s (a) accurate and (b) should be said. After all, I did not spill the beans. But, no, I am too mature. A small sacrifice, for Red Beans and Rice.

3 thoughts on “Papier Plume Red Beans and Rice: The Newest Ink in the New Orleans Collection”