Normally I mark the arrival of the fall season’s arrival by switching out my inks to fall colors, but this year I seem to have done that with new pens. Maybe pen companies bring out new autumnal pen colors every year, and I’ve only noticed this year because they are pen companies I like, but I can’t remember a year I’ve seen so many tempting new pens so late in the year.

I do not think this is fair.

First, I had the chance in August to pick up a used Nakaya in Unpolished Shu, that is absolutely gorgeous, with an amazing BB flex stub nib. As luck would have it, more recently I added a second, a Piccolo in Polished Shu with a wonderful fine nib. Which gives me … and yes, I’m going to say it again … a pair of Shu’s.

Unfortunately, because I have bought too many other pens this year, I’ll have to sell those onward soon. But they are amazing to use, and to look at. I really love the dark red of Shu. 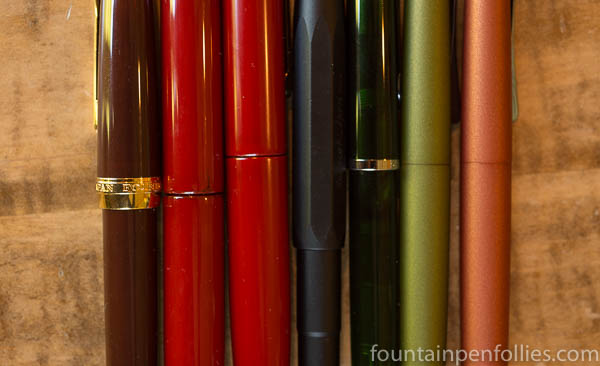 But even the Nakayas weren’t first. First was a Sailor. Not the 1911L in Key Lime that came out in September. Though it’s stunning, the Key Lime is yellow-green and doesn’t feel autumnal. No, I am talking about the Sailor Professional Gear Earth, which I bought earlier this year for its killer extra-fine nib. The translucent brown color of Earth comes into its own this time of year.

And then there are the brand new pens.

First came the Pelikan M600 Vibrant Orange, which is a fall pen for me because I’ve pre-ordered it, even though it doesn’t arrive till November.

Then last week, unexpectedly, the deluge.

I realized — in the worst possible way — that Pelikan’s annual M200-style pen the Olivine is an M205, with the silver-colored trim. Silver-trimmed Pelikans happen to be my biggest weakness. You might well ask, What’s the worst way to learn this? The answer is: when you’re holding one in your hand.

Unfortunately for me, the M205 Olivine also is a killer shade of translucent dark green. Even the medium stainless steel nib is excellent.

You might ask, since I’m dead anyway, what was my second-biggest weakness? That is apparently simple: all other pens.

But I only thought I was dead. Apparently I am a Halloween zombie, because I died a second time. I got a surprise: along with the M205 Olivine, Dan Smith, the Nibsmith, sent me, without telling me, three new pens to review. That should have been safe: one I hadn’t heard of, and the other two I wasn’t interested in.

The one I hadn’t heard of is a Kaweco AL-Sport in all-black, with a matte finish, called the Night Edition. I don’t even like all-black pens — it’s such a basic and boring pen color, why use more of it? So why, when I opened the box, puzzled, and pulled out this pen, so dark as to be almost invisible, did I immediately say, “ZOMG, mine.” Because it is that excellent.

The two fountain pens I wasn’t interested in are Lamy Studios, in Olive and Terracotta. I mean, I’m a Safari and Al-Star fan, not a Studio fan. These are newish. It turns out Dan got his hand on a few, but they aren’t even US releases for some reason I don’t understand.

What I do understand is that these are essentially the same colors as the two original Lamy Safari colors, Savannah and Terracotta. Now, I am the world’s biggest and nearly only Lamy Safari fan, as you know, and it just so happens that I’ve spent years suggesting/begging that Lamy reissue the Savannah and Terracotta Safaris. So I should be very annoyed that Lamy finally did so, except in the form of a Studio. A Studio is more formal, and heavier, and has a better section. It’s also more expensive. And not a Safari. So who needs Studios in these colors?

Apparently, me. Thanks, Lamy. The truth is, these are great colors that look great on the Studio.

They aren’t actually that expensive, even. Dan is charging $87 for these, which I know because someone at my pen club saw “my two” yesterday, and immediately wanted to buy one for himself, so I had to ask. Dan fitted the Terracotta with a 14k gold nib, which is an upcharge of $89, which is worth it if you want a more refined writing experience. Though I personally like even the stainless steel nib just fine. Even the shiny steel section doesn’t bother me, on these pens. Because the pens are so gorgeous

If I were to justify them — which I manifestly will not do, so don’t even suggest that — I’d point out that $87 for the Studio with steel nib is comparable to an Kaweco AL-Sport, except the Studio has a better converter and doesn’t need to be used posted. Add $89 for the gold nib, and your Studio then compares to the smaller size Sailor Professional Gear Slim or 1911S — except the size of the Studio is, for me, much better than Sailor’s smaller sized pens. The gold nib Studio is nicely comparable to the gold nib Pilot Custom 74, and it’s much cheaper than Sailor’s larger size pens.

Unfortunately, I am way past the point of making sensible comparisons. And well past my budget. I cannot own every pen I want to own. But how I’m going to figure this out is a problem for another day. For now, it’s harvest season, and pens are the crop.