Fire and Ice is a little exciting for me: I’ve been hearing a lot about this ink from friends for the last few weeks, so it’s fun to try it. Word is that it has nice sheen.

But the truth is, I don’t really go gaga for sheen. Fire and Ice also has a nice color, and the name is nicely Game of Thrones-y, so that’s more why I inked it up. I put it in my blue Aurora Optima with a broad nib.

Now, I’m not a sheen person. But look at the red dye on the Optima’s ebonite feed and the end of the section, and then look at the teal ink in the Optima’s ink window. That red dye tells me something unusual is going on with this teal ink. Also: Fire and Ice, huh? I like that. 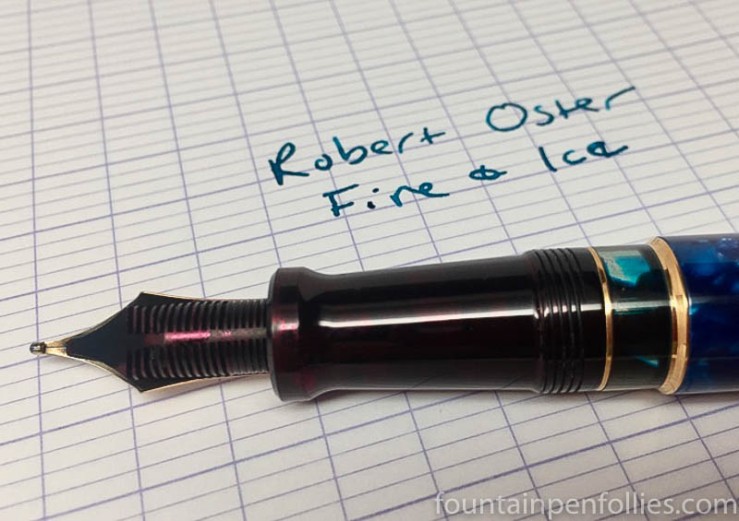 Again, I’m not a sheen person. But here’s what I see on Tomoe River paper.

To me, that’s a good amount of sheen. It’s more than I usually see.

It’s always good fun when you get red sheen with a teal ink.

Tomoe River paper is the only paper I really use that brings out a lot of sheen. But I see a lesser amount of sheen even on Rhodia. Look at how the “i” in Optima looks different — that’s the red sheen, right there.

I may not be a sheen-chaser. But I see sheen with Fire and Ice, and I like the sheen I see. I do happen to be big fan of shading, and Fire and Ice has really nice shading, too. So far I give Fire and Ice a big thumbs up. It reminds me of a favorite ink, J. Herbin Emerald of Chivor, except without gold particles and with perhaps less sheen.

I want to add, however, that some of my friends have bought bottles, and aren’t as delighted as I am. To them it’s more a “nice ink,” while to me it’s a “very nice ink.” It’s possible that my sample has more sheen than they see in their bottles. My Auorora Optima broad nib is no paintbrush, but it’s fairly wet — perhaps it’s wetter than their pens. It’s also possible that they expected and wanted a super high level of sheen, ala Emerald of Chivor. As always, everyone’s experience will vary.