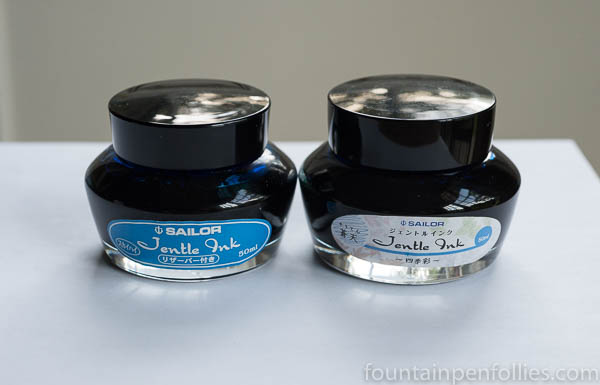 I plan to do a more in-depth look at Sailor Souten, but we were talking yesterday about how it compares to Sailor Jentle Sky High, and here’s a quick look at just that.

Sky High is my favorite Sailor ink, and one of my all-around favorite blue inks. It’s just a nice, cheery blue, with great shading, and uncomplicated behavior. It even has nice red sheen for sheen fans.

But when Sailor discontinued Sky High, that was fine with me. I had a bottle, and I have a lot of blue inks. If I ever used up my Sky High, I’d be left with only 943 other blue inks. Not a tragedy.

But Sailor did bring out Sailor Jentle Four Seasons Souten, and I was given a sample, and eventually bought a bottle. I’ve been using both together for the past few weeks, to evaluate Souten and compare the two.

I don’t think they are identical. I think Souten may be very slightly darker than Sky High. Maybe I’m wrong about that, but I am certain that any differences are slight. (I’ve also done paper towel chromatography.) To me, Souten is essentially the same as Sky High.

Here’s a writing sample. Souten is the first ink and Sky High the second in each pair

I’ve mostly been writing with both inks in Lamy Safaris with broad nibs. Those are dry pens. Here’s a closeup.

I also tried the two inks in Edison pens with identical 14k medium nibs. Those are wet writers.

Sky High still looks just a bit lighter to me, after using them for weeks in the same pens on many different papers. But the two inks share the same hue, the same degree of shading and sheen and the same excellent behavior.

I was happy to buy a bottle of Souten. Sky High is a favorite, and I’m pretty sure I won’t even notice the difference.