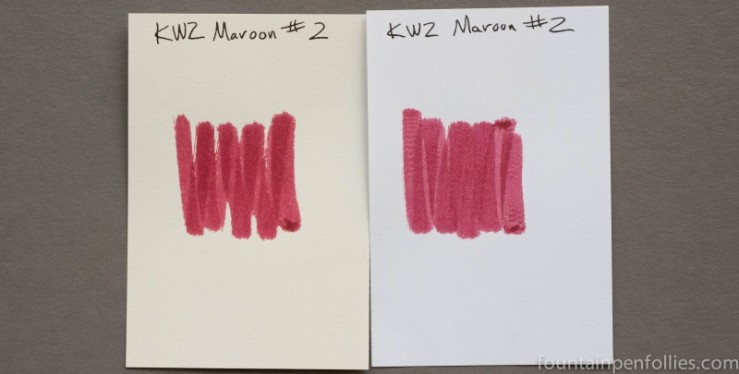 I reviewed the original KWZ Maroon last month, here. I totally fell for the first Maroon, which is exactly my kind of pink-infused burgundy with great shading and the ability to shine in an extra-fine nib.  Before placing my order, though, I wanted to compare Maroon #2, which looks similar in the swabs. 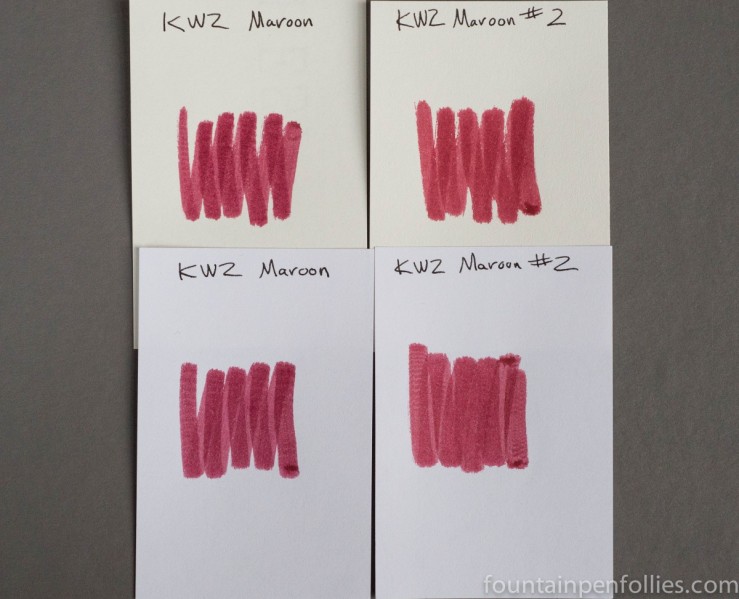 Now look at the next photo.  Since we’re looking at swabs, here’s a funny thing. 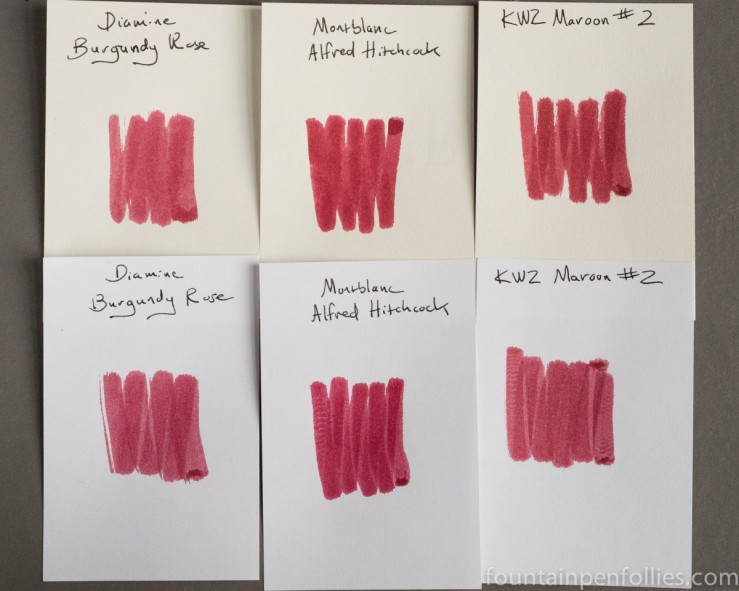 In the middle is Montblanc Alfred Hitchcock, which I adore.  But alas poor Hitchcock ink was a limited edition and is now no more.  So, to the left is Diamine Burgundy Rose, which is as close to Alfred Hitchcock as I’d been able to get, and by the way is pretty close.  Now look to the right, where KWZ Maroon #2 sits.  That also looks close.

So, I put Maroon #2 in three pens: an Aurora Optima with medium nib, which you can see here, as well as the two pens I’d used with the original Maroon, those being a Lamy Al-Star with medium nib and an Edison with custom-ground extra-fine.

In my review of the original Maroon, I mentioned that it did not really flow well with the Lamy Al-Star, since both ink and pen are on the dry side. Well, Maroon #2 is on the wet side, and it worked beautifully in the Al-Star.  It started up immediately, even after a few days when I didn’t use the pen.  Maroon #2 flowed perfectly, with a nice lubricated feel. It looked good, too.  Here it is on Rhodia. 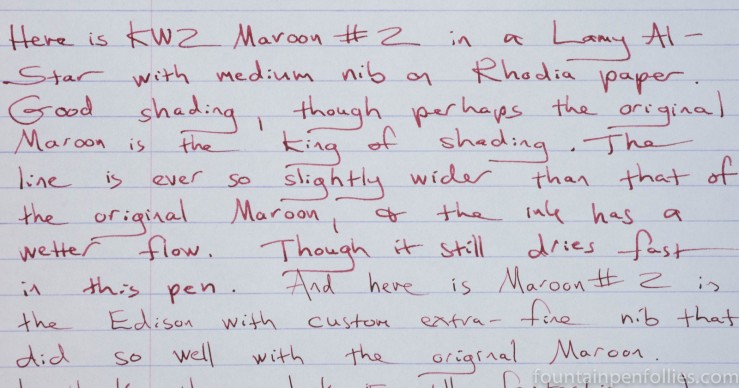 The extra lubrication and flow made Maroon #2 write a slightly wider line than Maroon.  But just like Maroon, Maroon #2 shaded very nicely. And Maroon #2 still looked great in an extra-fine nib.

At this point, I was comparing my writing samples side by side, and I just wasn’t sure. The ink colors looked incredibly similar; I wanted to say they looked the same.  But maybe as the swabs seemed to show, the Maroon #2 looked just a bit redder.  Maybe it was just the extra ink flow. I wasn’t sure. 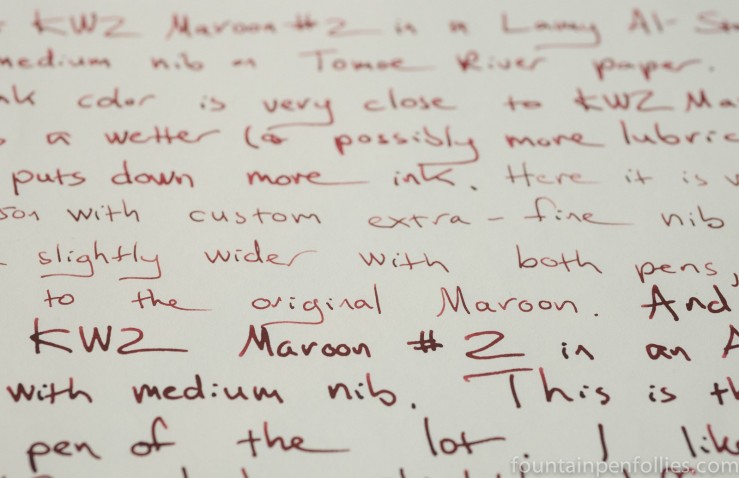 At the very bottom of that Tomoe River paper you can see a few lines written with the Aurora Optima.  Now, that is a very wet-writing pen, and in combination with the wet-writing Maroon #2, it put down a lot of ink.  I think Maroon #2 shows a very slight brownish tint, especially on cream-colored paper, but I noticed that more with the Aurora.

Here is the Rhodia sample, where the hint of brown is only visible to me with the Aurora Optima. And it’s just a hint.

One upside to a wetter ink is that it works better in a dry pen.  I saw that with the Lamy Al-Star.  Another upside for many is that in a wet pen, you can get a much more saturated color, which I see in the Optima writing samples.  I also think the wetter Maroon #2 varied its look more when it was used with different pens.

Downsides to a wetter ink include that it can take longer to dry, and that it doesn’t always handle poor paper as well. Maroon #2 still dried quickly for me. But it wasn’t as good on poor paper as the drier Maroon.

On Staples Sustainable Earth, with both the Lamy and the Edison Maroon #2 didn’t feather much, and I didn’t see either showthrough or bleedthrough. But the wetter Optima, which only has a medium nib, did show a tiny bit of feathering, a decent amount of showthrough and even a bit of bleedthrough.  Here is a writing sample with all three pens.

And here is just the Optima on the Sustainable Earth.

Aside from the different ink flow, behavior was identical between Maroon and Maroon #2.  Both were easy to clean from a pen.  And, as with the original Maroon, there was very little water resistance from Maroon #2 on smooth paper, but some dye remained on more absorbent paper. 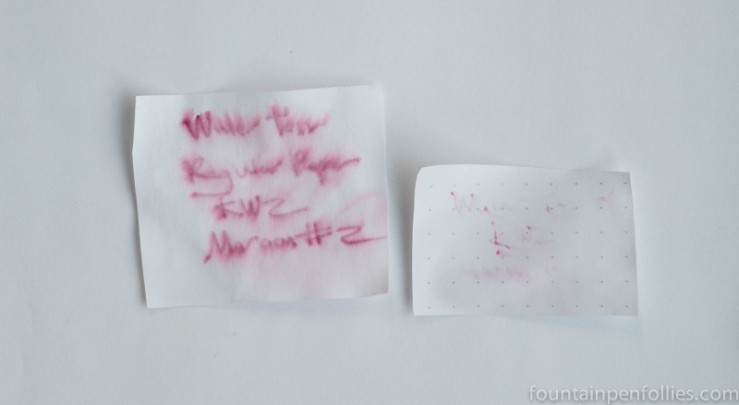 So, where did I end up between Maroon and Maroon #2, after using them successively in the same pens? What about the color?

Well, the more I used Maroon #2, the more I thought it was identical to Maroon, or nearly so, despite the swabs suggesting otherwise.

Here are writing samples, with Faber-Castell Garnet Red thrown in there, too, because Garnet Red was the closest to the original Maroon in my judgment. Maroon and Maroon #2 look awfully close to me.

Here is chromatography of Maroon #2. 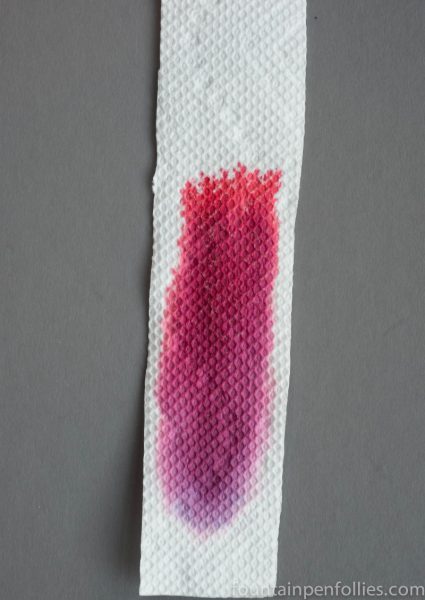 And here is chromatography of Maroon, on the left, and Maroon #2 on the right. 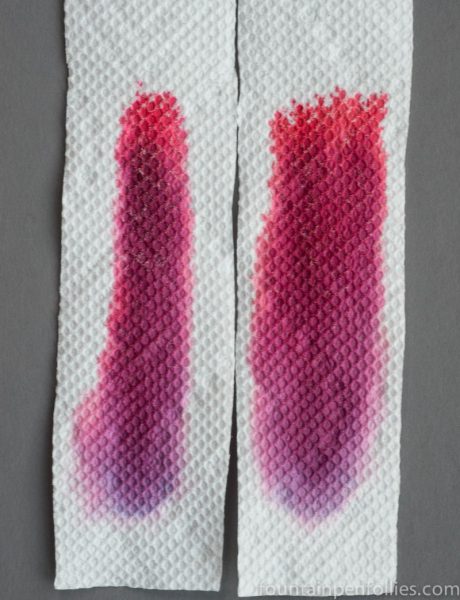 The last thing I did when reviewing Maroon #2 was the chromatography, and I am glad I put it off.  Because  these have nearly identical, dye mixtures.  And I’m glad I didn’t know that going in.  It would have probably (i) influenced my review and (ii) made it much more boring to do.

In any case, the chromatography confirms what I felt after using the two inks successively in two of the same pens.  They are very, very similar, though not exactly the same. To me as a user, the key difference is the ink flow, with Maroon #2 being on the wet side, and Maroon being on the dry side.

Maroon #2 works better with dry pens.  So if your main pen is a Safari or Al-Star, Maroon #2 will be a better choice.  If you like a very saturated and deep color and either use high quality paper or only write on one side of the paper, then Maroon #2 is an excellent choice no matter what pen you use.  The deep color I got from the Optima stemmed from that extra ink flow.

On the other hand, if you tend to use very wet pens that you want to tame, or you want a better performer on poor paper, or you want a narrower, tighter line, then Maroon will be a good choice.

Are the KWZ Maroons really like Hitchcock in use?  I think they are close, but the brown tint of both Maroon and Maroon #2 is something I don’t see in Hitchcock.  Instead Hitchcock to me is just a bit more lively, because slightly more pink.  That said, I think it’s close enough, as is Burgundy Rose. And many Hitchcock users see a brown tint in Hitchcock, too.

Like Maroon, Maroon #2 is a beautiful ink. I really enjoy them both. 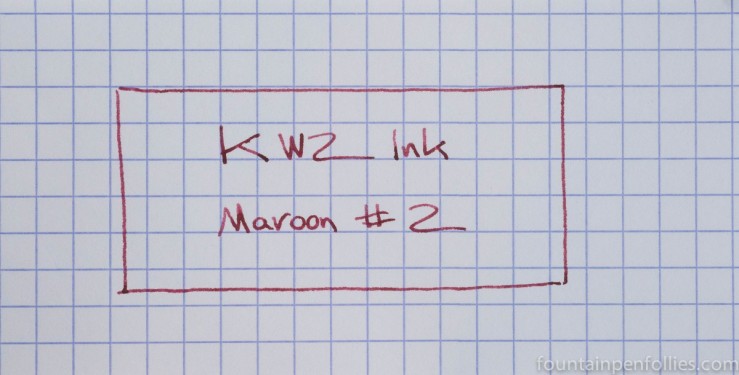 I received this sample of Maroon #2 from KWZ Ink so I could review it.  KWZ Ink is available online from at least one US store and also directly from KWZ in Poland.