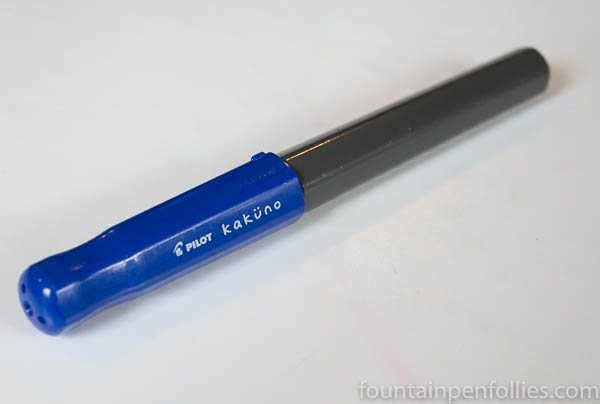 I’ve been using this Kakuno about a month, alongside other fountain pens that are a lot more expensive. Its writing performance definitely holds up to those pricier pens, because Pilot’s steel fine nib continues to be out-perform its price range. It’s a great nib for those who like fine lines.

Other positives? The Kakuno price. Even new, these cost only about $12. There’s no clip, but a bump on the cap functions as a useful roll stop when you put the pen down. The pen’s pretty comfortable in use, too. It may be a tad light and short for some, but it can be posted, and even without posting it’s bigger than an unposted Prera. The grip is longish, and gently and unobtrusively shaped, so it’s comfortable. 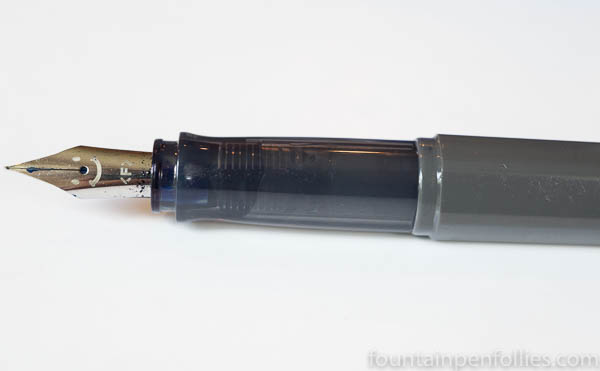 Negatives? The pen body is the definition of “basic,” and the plastic is, too. The plastic shows scuffs, scratches and wear excessively, even compared with other inexpensive plastic pens I have. You can see the scuffs in the photographs. Remember, this was a used pen, so I get the benefit of knowing what it looks like when it’s not brand new.

Also, the Kakuno is pretty obviously trying to aim at young children. The body is faceted, and wider than normal. There’s a clumsy bulbousness to the size, shape and design that makes you think “for small fingers.”

You can see that when you compare it to a Lamy Safari and a Pelikan M205, two classic “student pens” aimed at older students, and adopted by adults in the US. 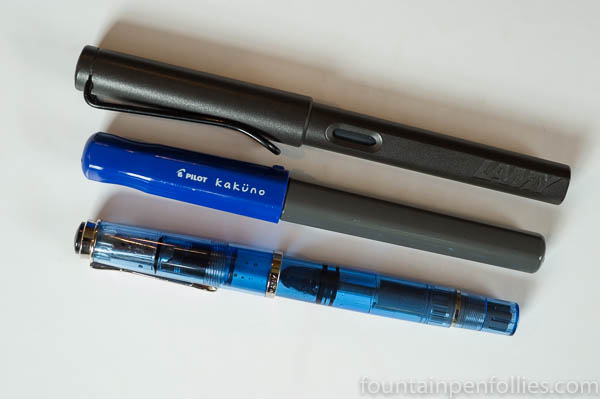 But the size might make it good for people with arthritis or other hand issues, so actually, that’s kind of useful.

It’s really this that leaves me cold: 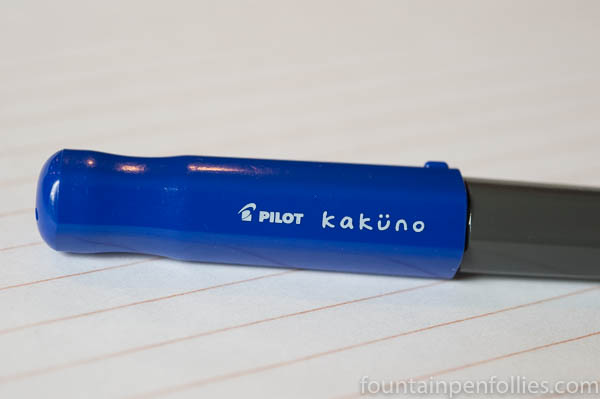 Pilot chose a goofy, lower-case font for the Kakuno name, then chose to pair that with the clashing, business-like Pilot mark, and then chose to make it all very noticeable in white. As you can see in the pictures of the full pen, the Kakuno name visually dominates the pen, gracelessly galumphing across the cap like a demented horse puppet.

But, the Kakuno is not a precious pen. In fact, its “meh” touches underscore the sense that the Kakuno is the kind of pen you don’t mind subjecting to wear and tear, even loss. It’s not stylish or long-wearing, like a Lamy Safari. It feels nearly disposable. But it’s also less than half the price of a Safari, in the US.

So, is it a good beginner pen?

I think … not really? It’s okay, in the same sense as a Nemosine Singularity. But the Kakuno is unlikely to “hook” many people on fountain pens. There’s no magic.

And that’s a shame. The Pilot fine steel nib is excellent, and it could be a wonderful gateway into fountain pens for people who love to write with fine lines, if only Pilot would put that nib on a more universally-appealing pen. (The Kakuno being basic; the Metropolitan being heavy and uncomfortable; the Prera being small and pricey; the Cavalier being too slim for today’s tastes. Did I miss one? If I did, don’t remind me.)

To me, the Kakuno is probably best for those who already have the fountain-pen bug, and are looking for a knock-around, carry-around, pen. One positive is that the Kakuno does come in clear, and in clear, the Kakuno looks better. (Invisibility being the best superpower.)

The Google tells me that the Kakuno is also sold online with extra-fine and medium nibs, but I’d stick with the fine nib. The Pilot steel extra-fine is very narrow, and the medium nib is uninteresting, unless you really dislike a needle-like nib, in which case, why buy a Pilot? Get a TWSBI, a Safari, a Kaweco Sport, a Platinum Plaisir, or another pen whose nibs run wider.

If it’s the Kakuno for you, go fine, and go clear, and you will get the best of it.