My first purchase was a Parker Jotter ballpoint. Yes, a ballpoint.

I know this is not exactly an exciting pen to many fountain pen fans. It’s an older ballpoint, with a conservative style that says “perfect for the glove compartment of your 1960s Dodge Dart.” But I like it. And hear me out: what if I am ahead of the curve? This is so retro, it could become hip. Like rolled-up jeans, downtown Detroit, or beer in cans. It’s so uncool, it could become cool.

Also, mine is much more exciting than most Parker Jotters. It is bright yellow. 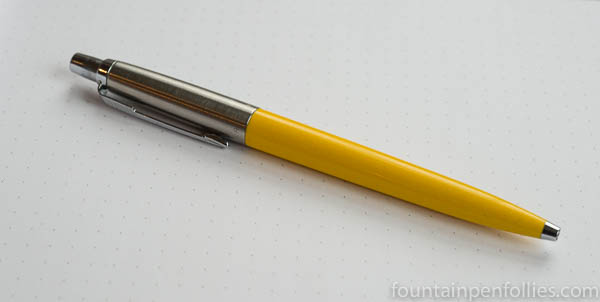 Mine has some real horsepower under the hood, too. First, it’s got a gel refill — that’s right, it’s not a pokey old ballpoint, but a turbocharged, smooth writing machine. Second, it’s an older, made-in-the-USA Jotter, with brass threads. That gives it some prestige among my fellow Jotter cognoscenti — and yes, that may amount to only a small handful of people, but at least it’s a step up from those total dead enders who love Lamy Safaris, right?

If you’re paying attention, this happens to be the second Parker Jotter I’ve bought for myself in the past month.

And yes, both are yellow.

But I am the person who already owns at least five yellow Lamy Safari fountain pens, as well as a yellow Aurora Optima fountain pen. And possibly others that I don’t have to acknowledge except under oath.

So, yes, I appear to buy yellow pens more often than people who are “normal” or “sane.” But it’s okay now. I’ve reached critical mass. If the subject ever comes up, now I can credibly say, “I collect yellow pens.” Accompanied by a hard stare.

So I think this is good.

Plus, I bought a fountain pen, too. Which by the way, is not yellow. Nor white. Points for me for both accomplishments.

My fountain pen is a Parker 75 in Thuya Laque, which is a lacquer finish in dark brown with lighter brown squiggles. It’s beautiful, in a traditional way, if you like that kind of thing.

Thuya has something to do with burl wood, which I just looked up for you now, don’t purport to understand, and likely won’t remember next week. I just like how it looks. I watched over a number of these pens at our table all weekend, and finally had to adopt my favorite.

This particular pen was made in France, and it’s from the very last years of production for this finish. It was made either at the end of the 1980s, or in the year 1990. Mine has a fine nib, which is lucky, because that’s my favorite size.

However, I may not recover either my finances or my self-respect for a while, because this is the second Parker 75 (with fine nib) I’ve bought from this estate in the last month. Making it the third Parker 75 I own, in total.

I may also have a line on a fourth 75. If we’re counting. Which of course we’re not.

They aren’t very punk rock. They aren’t even a little cool. A 75 isn’t even as cool as a Parker 51, and a 51 isn’t cool to begin with. The 75 is your Dad who golfs, while the 51 is your friend’s Dad who grew an Elliott Gould mustache in the 70s but still works in an office. Neither plays the guitar. To be honest, the lowly Parker Jotter at least comes in fun colors, and it’s pretty inexpensive, so it’s cooler than either.

But Parker 75s are good writers. And very high quality. And I’m a contrarian.

Here’s what I mean. My interest in fountain pens was re-awakened within the last decade, and what I’ve seen over that short stretch of time is a striking falloff in general interest in vintage and not-vintage-but-older fountain pens (like the 75), in favor of a tsunami of interest in new and contemporary fountain pens. There are many reasons for the preference for newer pens — which I share, by the way. But anything can go too far. And that can create a buying opportunity, even for dabblers and non-collectors like me.

When a TWSBI costs $60 new, and a Lamy Safari costs $30, before converter — while we at the Ohio Pen Show can’t interest anyone in a Parker 51 aerometric with gold nib for $50 — that seems like an opportunity. Or, when people are clamoring for a Pelikan M400 in brown tortoise at $380 — and I can’t interest people in vintage 400s, including brown tortoise 400s, which are twice as beautiful and half the price — that’s another opportunity.

I don’t mean money-making opportunity, either. I mean, writing opportunity. Or opportunity to own something of high quality at a reasonable price. You have to be willing to swim against the tide. But if you, like me, would describe yourself as a “pen user, not a pen collector,” don’t ignore the surfeit of older pens that make great users.

So it is with the Parker 75. It’s a cartridge/converter pen, with a gold nib, in various beautiful materials, built to a high standard of quality and finish. They almost never need restoration when bought used — just a flush with water if you get yours “in the wild.” But a Parker 75 in sterling silver in great condition generally costs less in the US than a new plastic Pelikan M200 with stainless steel nib.

Parker 75s make excellent pens for users because they have the kind of nib you’ll find on most contemporary pens: smooth and hard, not soft and flexy. And a 75 nib is gold. In fact, my Thuya is made in France, so the nib is 18k gold. It’s hallmarked, and looks a little fancier, too. 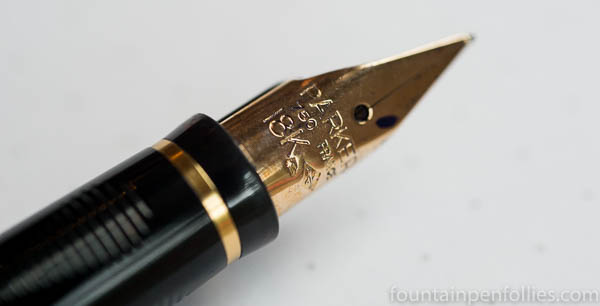 So I’m chuffed to add another Parker 75 to “the collection.” It’s a nice piece of pen history, and mine’s pretty. But mostly it’s a great pen to write with.