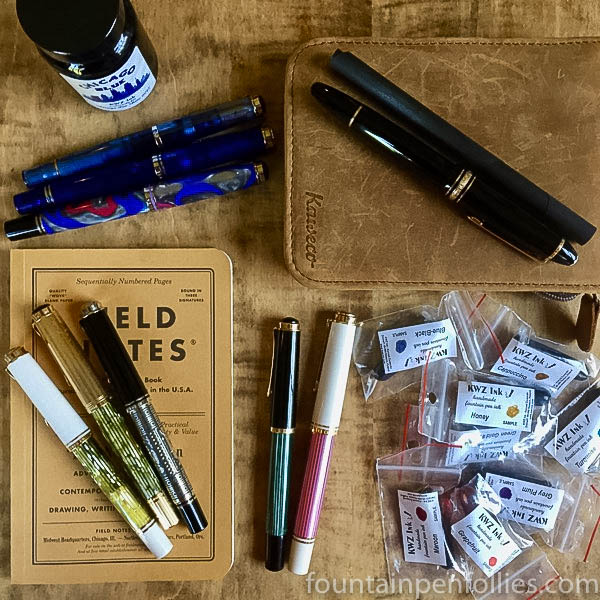 Pelikan Hubs are volunteer-run gatherings in cities around the world, held once a year, on the same Saturday night. Anyone can sign up during the sign-up period to attend. A “Hub master” organizes and runs it in each city, but Pelikan handles enrollment and even provides gifts for attendees. This year Pelikan gave attendees in Chicago a bottle of Smoky Quartz, the 2017 Edelestein Ink of the Year.

The social media buzz around the Hubs has grown each year, and so has attendance. Our Chicago Hub last year was a small, but excellent, gathering, and this year’s was a lot bigger and just as excellent.

I’m sure every Hub is different, but at Chicago we’re encouraged to bring pens and inks to show, and, if we want, inks to share. Most of what I brought is in the photo above. I also brought a bottle of Robert Oster ink, and my pal Karl brought a different Oster ink. The tables were full of inks and ink samples generously shared. I even saw a Lamy Petrol sample in there. In addition, Pelikan kindly provides the Hub master with a bottle of each of the Pelikan Edelstein inks for attendees to try.

It’s fun to see everyone’s pens. In the photo below, the pens on the bottom are from Hana’s collection. Hana likes green pens, as you can see, and also green inks, which you could probably guess. This is a great example of how satisfying a focused collection can be. 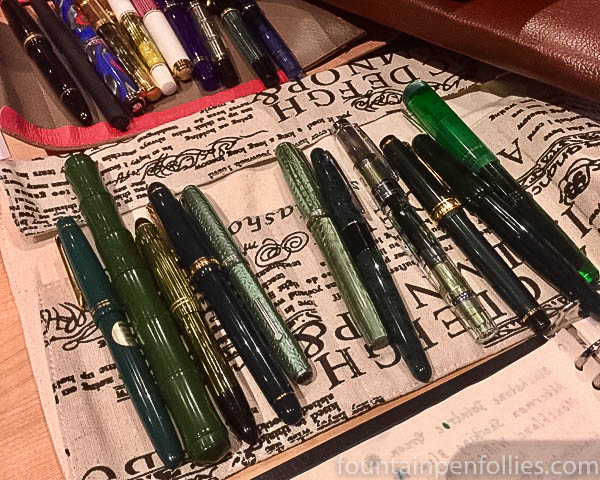 The Chicago Hub was especially lucky, because Pierre from Desiderata Pens is a Chicagoan, and he came with some of his own handmade Desiderata pens, which are bulb fillers that take Zebra dip pen nibs. I loved the attractive but reasonably priced designs. My favorite was a sleek, slim and minimalist Delrin pen.

Speaking of minimalism, I was happy that people loved using my Venvstas Carbon T fountain pen. The Carbon T is minimalist, and cool-looking, but there’s also something perfect about writing with it, and that’s what everyone else noticed, too. It is a very slim pen, so you don’t necessarily expect it to feel so comfortable when you write with it.

By the way, the Carbon T was inked up with Pelikan Edelstein Garnet, the 2014 Ink of the Year, which everyone really liked. So if Pelikan ever wants to bring back an ink of the year, that would be a nice choice. 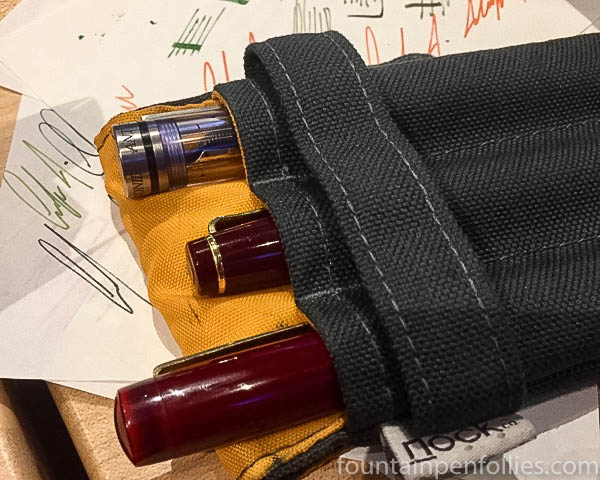 Good things come in small packages, right? In that little Nock Co. case, owned by Jordan, is a Sailor (nice!), a Nakaya Neo-Standard (nice!) and a Conid Bulkfiller (unicorn nice!).

I was excited to try my first Neo-Standard. And very relieved to confirm it’s too large for me, so I don’t need to put that on my list. As for the Conid, I’d never even seen a Conid in person, so that was super cool to try, as well. Both these pens had outstanding nibs.

Sailor pens I have loved forever, but Jordan’s Sailor was a Realo, which I’d never held, so that was awesome, too. Actually, I think Jordan had two different Realos. Nice.

I also got to see Carlos’s Pelikan M400 Stresemann, confirming that this is a pen I’d love to own at some point. So, back on the wish list for that.

We all went gaga over Michael’s amazing Shawn Newton pen made with a stunning Jonathon Brooks material. In my role as Chicago Pen Show carnival barker, I couldn’t help pointing out that we’re going to have Shawn and Jonathon both at the 2018 Chicago Pen Show next May. And then we all got excited again remembering that Kanilea will be there, too. (Oh look, I mentioned it again.)

By this point, my wish list is getting long.

But this is an appropriate time to point out that most of the pens at the Hub weren’t bank-breakers. The Desiderata is reasonable, so is the Carbon T. And there were Pilots, Conklins, Pelikan M205s and inexpensive (but awesome) vintage Kawecos as well. There was much to ooh and ahh over, in every price range. 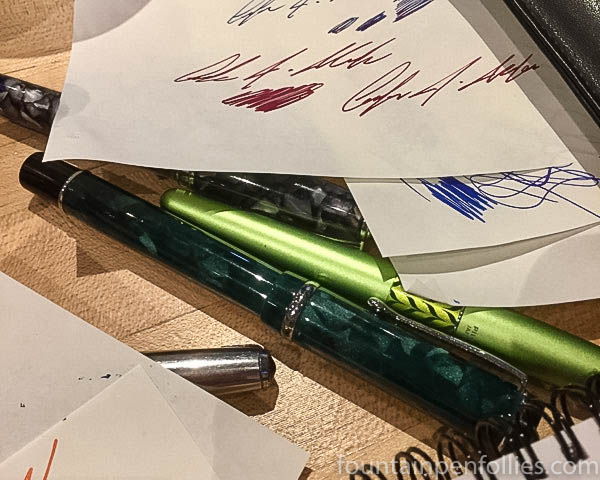 I liked to hear what pens and inks everyone was interested in. Happily, the Lamy Safari has a lot of fans — as it should. Well, this was a gathering of educated and civilized people with great taste, so.

In the pricier range, the upcoming Pelikan M605 generated a lot of discussion. Feelings were mostly extremely positive: a lot of us were crushing on the M605, though a couple weren’t as enamored of an all-white pen.

I think the most popular Pelikan that I saw at the Chicago Hub was the M400 White Tortoise; a lot of us brought ours, and a lot of the others had the White Tortoise on the wish list. I also saw a fair of M200s and M205s, and an M800 or maybe two. I didn’t see anyone bring M600s, other than me, and I saw no M1000s (though of course I didn’t see every pen there). I wonder if this is a decent approximation of the distribution of Pelikan fountain pen sales in the US: mostly the M200 and M400 size, then the M800, then the M600, then the M1000.

As for the inks that took people’s fancy, I’d say it was heavily Sailor and Robert Oster this year. A lot of us had tried many of the Robert Oster blue-green, green and blue inks, and we’ve all been impressed by both the inks and the sheer number of slightly different ones he keeps bringing out.

Also, it became apparent that many people use purple ink.

I don’t pretend to understand that. I’m a reporter, not a therapist.

Oh, everyone adored Papier Plume Red Beans and Rice. And we all thought it looked exactly like red beans and rice. Because it does.

In terms of paper, as in every fountain pen gathering I’ve ever attended, or even any email or text discussion, everyone’s favorite was Tomoe River. That’s a shock, I know. You never hear anyone mention that paper, do you?

But, also, Michael and I both brought the new Field Notes Dime Novel. And, because I like you, dear reader, I want to show you the kind of things Michael has been doing with his Dime Novel. 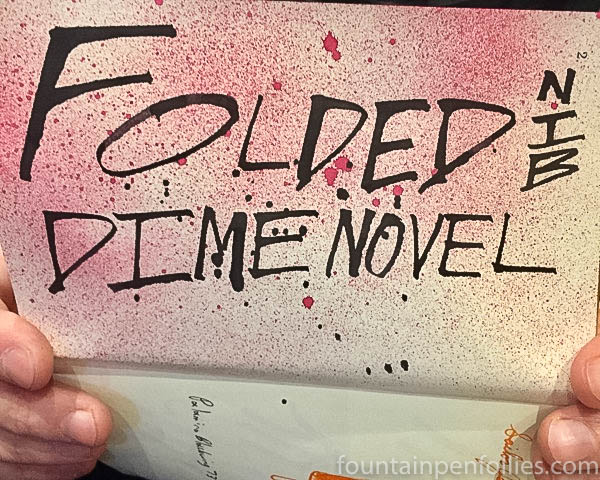 Wow, huh? I wish I had taken photos of every page. He’s amazing.

Michael and I both like the Dime Novel’s paper, too. Which causes me to say: I may have been a bit too hard a grader when I pronounced it average in my review. I may revise that to say “slightly better than average,” albeit, not like Tomoe River, Rhodia or Claireontaine. Both Michael and I saw a small amount of feathering, with ink and pen combinations that tend to feather, but it’s really not that much.

In fact, in the dim light of the restaurant, I could hardly see the feathering. Which brings up an important point that I don’t think I’ve seen considered much in a paper review: Where do we want to spend more time anyway? A harshly lit office, or a dimly lit restaurant?

Now, back to pens. I think it was Hana who brought to the Hub that obscure object of desire, at least of mine, which is a pen with a Sailor extra-fine nib. I love Sailor nibs, which are very fine, very firm and very precise. But I’ve never known if I should get go to 11 and get the extra-fine. So it was awesome to get to try one finally, and I loved it. But, yeah, now a Sailor extra-fine is on my wishlist.

So there we are, with a wishlist that is very long, at the end of a very nice evening. The Pelikan Hub was a great experience, as you’d expect of any get-together with very nice people who (for once) share your quirky interest in fountain pens. Thanks to Pelikan for thinking of the Hubs concept, and continuing to support it, and thanks to all the volunteer Hub masters for putting in all the work to host these (especially Chicago’s). A Pelikan Hub brings fountain pen people together, and that’s worth applauding.