The Carbon T is a modern fountain pen, in a minimalist design, made of carbon fiber, and priced at 75 Euros. Venvstas is a small company, based in Paris, and started by an architect, artist and designer named Lucio Rossi, who wanted to make tools for artists and architects. I wrote a detailed review of my original Carbon T here, and posted a first look here.

I bought one of the first Carbon T fountain pens, I think. I loved the minimalist aesthetic and design. And I liked using the pen. The un-ornamented design made the fountain pen more like a classic wooden pencil — a tool you don’t think about, but just use. I also appreciated having a well-designed modern pen in carbon fiber at a decent price, too.

Unfortunately, months after I reviewed mine, in late 2016, my Carbon T developed an issue with ink drying out in the feed when the pen wasn’t in use. So I put the pen aside to email Lucio Rossi. When I finally remembered, this spring, to email him, Lucio told me to mail the pen back and he’d fix it or replace it.

Now, note that when you email Venvstas, you speak directly to the owner. Also note that my pen was nearly a year old by then. But he stood behind it with no question. That’s great service, and frankly better than I’ve had with some more expensive pens.

Lucio looked at my pen and figured that an air leak might have developed over time in the original cap, which has since been modified. So he sent me a new, updated Carbon T, which I’ve been using since early May.

My new Carbon T works perfectly. I have been using J. Herbin Éclat de Saphir cartridges, and the ink flow and startup have been perfect. The nib is a standard European fine nib, with slight feedback, as I like in a nib. If you wanted a smoother nib, a few swipes on micromesh would be all you need. The nib was aligned out of the box.

Lucio has been tweaking the design of the Carbon T in the past months to improve it little by little. In the future, the Carbon T will only have a clipless cap, like the one I’m now using. That cap has been modified to be more airtight, with steel instead of brass inside. The new cap is slightly shorter, which has made the pen perhaps a millimeter or two shorter.

I notice a few other changes. The guard on the bottom of the feed is now made of carbon fiber, so less noticeable. The best change is that the tiny screw that once protruded on the section is now inset completely, making the section perfectly comfortable now. Lucio said that he might eliminate that screw entirely in the future.

I think the Carbon T, and probably all Venvstas pens, will continue to evolve over time. Lucio seems to be constantly thinking of new ideas and improvements, including some neat ideas for new converter options.

In terms of aesthetics, the Carbon T retains it original look, but it looks even sleeker. The fit and finish is tighter and better matched now. The clipless cap accentuates that. The current Carbon T is even more clean and minimal. If you liked it before, you’ll probably like it even more now, as I do. 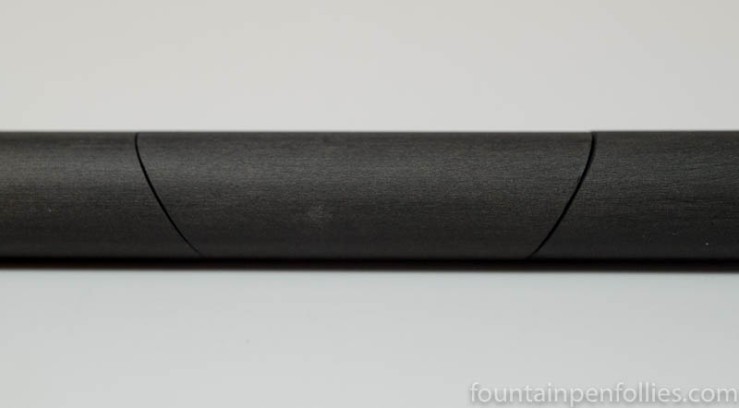 On the minus side, my new Carbon T does not accommodate every standard international converter: the metal collar or clasp is just too narrow for the ones I have. So for now I’m using it with ink cartridges.

Lucio said that Venvstas converters are thinner, as are some from Kaweco, Schmidt and Pelikan. Now, the Venvstas converter did fit in my old Carbon T — albeit very snugly — and perhaps that would still fit in my new one. But I don’t have that converter any more, because I sent it back with the first Carbon T. Alas. I’ll have to try again when I can get one of the thinner converters.

In the meantime I’m okay with a cartridge-only pen. I like cartridges, and I’ve got so many international cartridges that it’s good to have a reason to use them. Plus I know that I can fill empty cartridges with bottled ink using a syringe.

That said, it’s nice having the flexibility to use a converter. So if you want that, it might be best to order a Venvstas converter along with the Carbon T pen. It might even make sense to ask Venvstas to verify that it fits. My clasp is pretty tight.

The truth is, I’m still super happy with the pen. If you like modern design and carbon fiber, and don’t have a huge bankroll, it’s great to see a company like Venvstas designing modern-style writing instruments that don’t cost a fortune, and work very well. (Backed up with great service.) Venvstas has since added mechanical pencils and rollerballs, too, which also look great.