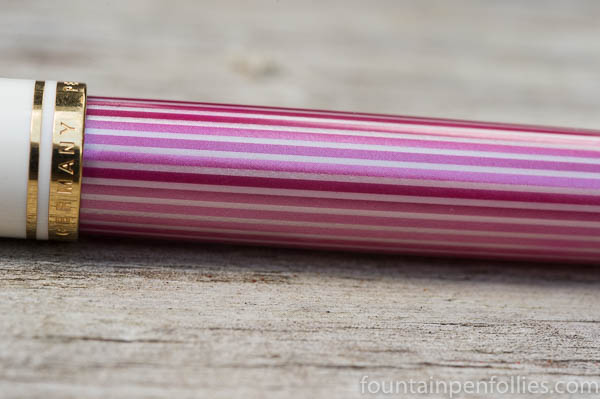 1. Pelikan Pink M600. The candy-stripe pink M600 is my Number One. It’s fun. It’s pink. I use this fairly often, actually, because I often use darker pink inks (like Pelikan Edelstein Turmaline and Caran d’Ache Divine Pink) instead of red inks.

Why is the Pelikan Pink a favorite? There are practical reasons. I love the M600 size. And because Pelikan’s nib units are swappable, I can use any M600 nib from EF to BB with it. But the main reasons are that it’s pink, and it’s fun.

Was the M600 Pink the first fun Pelikan in the last five years? I think so, if we’re talking the sizes below M800. And the Pink definitely looked like a risk. When the Pink Pelikan was announced, Pelikan took fire from all sides for producing a weird pink and cream pen, and marketing it to women with a box that belonged at Victoria’s Secret. Online objections came from some traditionalists who hated seeing a pink pen from Pelikan, as well as some women offended by the choice of pink for women.

Well, I was thrilled. I also felt pretty alone when I said that on an online forum.

Perhaps Pelikan felt pretty alone, too, and was worried about this very different pink pen that everyone seemed to hate, because Pelikan didn’t seem to produce many Pink M600s. All the Pinks in the initial run sold out quickly, and also those in a subsequent run. Well, Pelikan made up for their unnecessary caution afterwards, by producing white-striped pens every year since, first in turquoise, then white, then violet. I’m betting next year we see a lime green. That does sound fun.

So I like the Pink Pelikan because it’s weird and fun? Yes. Same-old same-old is fine, but it doesn’t get the blood pumping. From the beginning Pelikan experimented with unusual patterns and colors for pens, which all the so-called traditionalists may have missed, or just got used to after 70-plus years. For me, the Pink Pelikan is an example of Pelikan shining brightest when it returns to its more experimental and daring roots.

2. Pelikan Toledo M710 Black. This is the smaller Toledo model. Its hand-worked sleeve is sterling silver, and it’s the opposite of the M600 Pink in some ways. It’s dignified, restrained and traditional. But it also sparkles, in its own way, and it is also unusual in the larger world of fountain pens. I started with an old-style M700 Toledo in the more common vermeil, and used to own both; the one I kept was this one.

Why is this one a favorite? I don’t use it as often as the other Pelikans I have, and it’s in the smaller, M200/M400 size. But it’s the one I consider most special, and, it’s the one I’m least likely to ever sell. 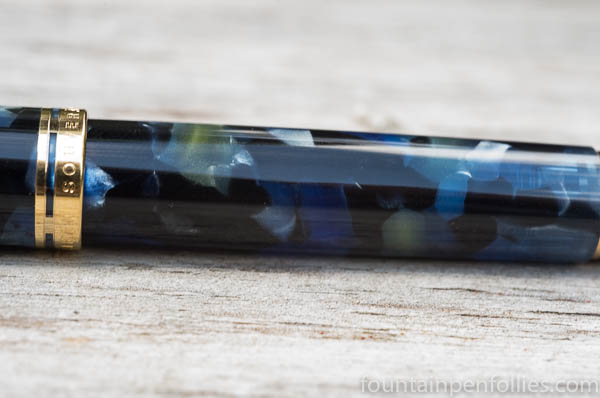 3. Pelikan M620 Stockholm. This is one of the old Cities pens, dating from 2001. I didn’t have the budget for these when they were current, or really even the interest — I had three young kids. But I serendipitously found my Stockholm on the used market at a reasonable price a few years ago.

Why is this one a favorite? Half of my family is Swedish. The pen material has a lot of blue, and blue is one of my favorite colors. But with the Stockholm, like the Toledo, it’s a different sort of favoritism: I don’t use it as often as others, but I really love having it.

4. The Next One. Because that’s how this works. I already have a lot of Pelikans, and I am not a collector, so I only buy a new one if I feel I “have to have it.” Chances are that means it’s a new release that will only be available for a limited time, and that it’s fun.

For now, the next one, and so my fourth current favorite, is the M205 Star Ruby, which is on its way from the Nibsmith. I didn’t even ask how much it cost. It was dark pink, it had sparkles. Maybe the most fun Pelikan yet. I told Dan I wanted one the minute he announced it.

Why the Star Ruby? Pinks and reds are among my favorite colors. This is the first Pelikan to be both transparent and sparkly. That’s my two favorite fun-pen materials in one, and it’s also the recipe that has been such a huge success for Sailor. Now it’s in a Pelikan for the first time, and I like Pelikans better. An M205 is also, for a Pelikan, a bit less expensive, which is nice. Except let’s not kid ourselves — in the US these are still very expensive.

I suspect that eventually the Star Ruby will prove to be one of Pelikan’s most popular and beloved special editions. At that point, far in the future, I’ll still have mine. But by then, odds are that I’ll be captivated by whatever is the newest, wildest, just-announced Pelikan. Because that’s how this works.

10 thoughts on “My Favorite Pelikans”