Thanks, Pelikan, from your friends in Evanston. Here are some who both fit in the frame and did not cleverly dodge the camera. 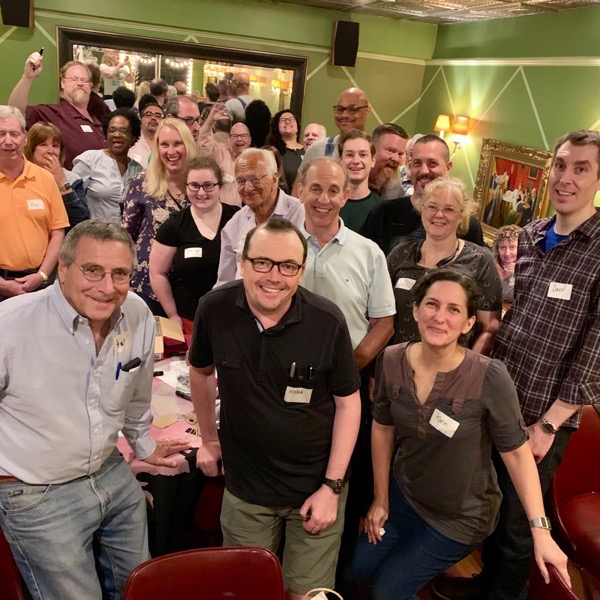 Those folks up there are the best. And that’s what a Hub is about. Talking pens and inks, meeting new friends and catching up with old friends. This year we picked a nice restaurant, with table cloths, even, and adult beverages for those who wanted. The atmosphere made for a nice social event. You get to know people differently over a nice meal than you do even at pen club meetings.

There still were pens and inks. David brought three Pelikan M600s, which are my favorite size, but in three different materials than I own, and loaded with some Diamine inks from European stores that I hadn’t used. That was nice. A different David brought his extensive collection of mostly vintage Pelikans, which are jaw-dropping. Haoran told me he brought a newly purchased vintage 100 or 101, but I didn’t get the chance to see it. Also, nice restaurants are dimly lit, so not great for photos.

But, since I know people like pen pictures, here are the ones I brought. 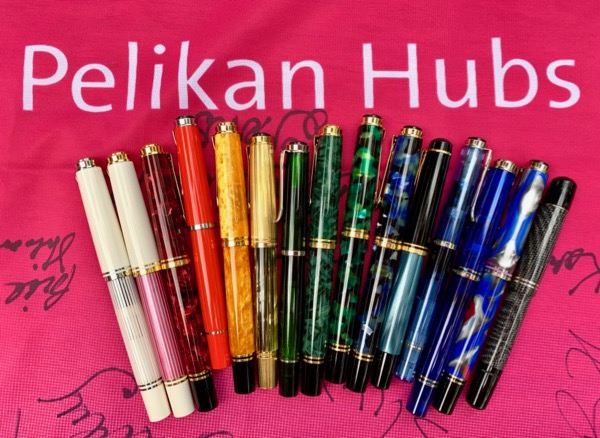 Those had nibs from EF to BB, and were inked up with all of the Pelikan Edelstein inks, current and historical, except for Amethyst this year (because I felt too sick to look for my bottle of Amethyst). I don’t have M800 or M1000s, but other people did, and I got to use those, too.

One thing that was so lovely at this, our second Evanston Hub, was that it was very much a group project. Everyone jumped in to help. I was the Hub Host, but Alex and Nash were greeting the new arrivals, getting them to sign up for the raffle and the such, and handing out the goody bags. It was Alex and Vern who came early without being asked and helped set up. Gary helped me do the raffle. Karin brought me a giant bottle of cough medicine from Tina. Jack helped me with cleanup and bringing stuff back. Fred not only found the restaurant, but he also contributed giant and delicious Lindt dark chocolate bars for everyone.

It was like a Utopia, with everyone pitching in. Also because of the chocolate.

And the Pelikan items. Pelikan is so generous in planning these Hubs, and providing gifts for every participant. Like last year, they sent not just the pad of very nice paper, not just a Pelikan Passion magazine, but also the bottle of Pelikan Edelstein’s ink of the year, which this year is Star Ruby. They also send the Hub Host bottles of other Edelstein ink, which at my Hub I give away.

So of our participants, Paul probably came the farthest: he drove two hours to get there. But Rich and Gary drove over an hour, and Gary had to catch a flight early the next morning. So did Susan, but she’s going to Hawaii so must be floating on a cloud of delight. Charles, Tania, Angel, Karl and Gabby had long trips after work. I think Stacie did, too, and Wes and Beth definitely did. Vern and Sheila came even though it was Friday and the night before Vern’s birthday. Alex brought her sketches; I hope Toni did, too. Pierre and Michael are our “pen world royalty.” And Art made me laugh, which is my favorite quality in a person.

One huge improvement in the Hubs this year: Pelikan sent the gifts directly from Germany to the Hub Hosts in America, which meant they arrived early, instead of the day before like when Chartpak sent them. With 31 registered participants in Evanston, that extra lead time meant I had time to buy gift bags, and buy Pelikan Hub stickers from Rickshaw Bags, and put everything together nicely. I had time to make ink samples of the Edelstein inks for people. And Fred had time to think of the chocolate bars.

So another Hub ended, like all the others, after a delightful few hours spent with pens, inks and good people. Spending time with other people is really the best medicine.

By the way, I did see some shade thrown online because the Chicago area had two Hubs. What?! That’s a good thing. I’d even say the Chicago area needs three Hubs. For those who don’t know anything about any part of the US that isn’t on a coast, the Chicago area is actually, ahem, fairly large and well-populated, and people live and work all around it. Evanston is a city of 75,000 people, home of the world-class Northwestern University. Evanston is to Chicago as Berkeley is to San  Francisco.

Well, except the Chicago area is bigger.

Can we talk about something? The fact that Evanston faced a level of disrespect deep enough to make me post a Pat Benatar video in rebuttal … I mean, wow. That is almost inconceivable. I may be closer to hospitalization than I thought.

But, reader, do not be tempted to go so far as I did, into schlock videos. Instead, ignore the scoffers. Be like Evanston. We belong. If you want to start a Hub in your area next year, find five to ten people, and start one. The Hub people at Pelikan Germany are lovely, and will support you, and getting together with pen friends is a good thing. Go for it.