I put the Oyster Grey in my Edison Herald with medium nib for this first look. Gray isn’t a color I get excited about. I do own three gray inks which I use regularly, and think very highly of: Montblanc Albert Einstein and both Pilot Iroshizuku Kiri-same and Fuyu-syogun. But after only a brief acquaintance, I think I may prefer Papier Plume Oyster Grey.

This is a fairly dark gray, which means it has good legibility. But the hue is sprightly and attractive — not dreary or depressing. And what nice shading.

Here is a writing sample on Rhodia.

I think Oyster Grey is on the wet side. It doesn’t dry immediately on fountain-pen friendly paper, at least not with the Edison, which is a wetter writing pen. There’s a slight color change as the ink dries, too, which I always love.

I know some Papier Plume inks feather on poor paper, but Oyster Grey showed an impressive resistance to feathering for me.  Here is an extreme closeup on Staples Sustainable Earth, my everyday paper.

I had some showthrough on the Staples paper. That isn’t really unexpected, since it’s a thin paper, a fairly saturated ink and a wet-writing pen. I had no issues on fountain-pen friendly paper.

Charles Dickens is a green-tinted gray, and Fuyu-syogun a blue-tinted gray. Papier Plume Oyster Grey seems to have a blue tint, but it’s a stronger, darker ink than Fuyu-syogun, and more of a presence.

Two great comments below got me thinking, so here are more swab comparisons. 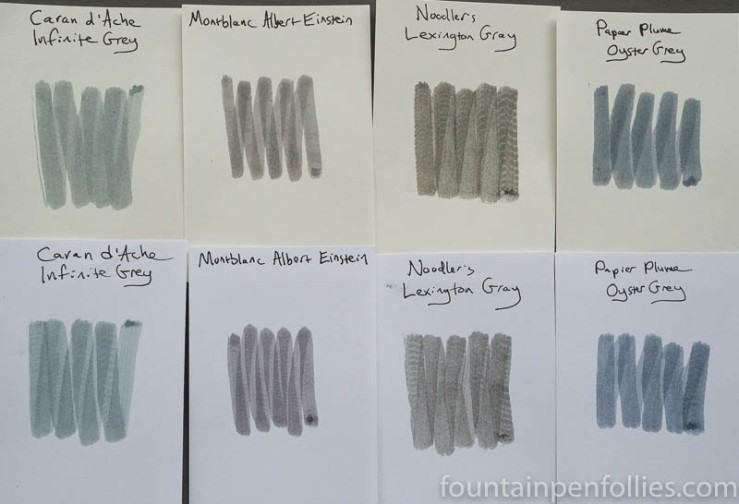 As with swabs, so when I write with it: Papier Plume stands out. No matter the paper, Papier Plume holds my attention. It will be one of the Ink Testing Station inks at the Chicago Pen Show, and I think it’s a great color.