I used Diamine Gerbera in two very different pens. The first is the vintage Pelikan 400nn with medium nib that wrote that line above. The Pelikan is the Sydney Carton of our little ink review — exciting, attractive but something of a problem drinker. On the other hand, we also have a Lamy Safari with 1.1 mm stub, playing the role of Charles Darnay — he’s good husband material, but more solid and reliable than dashing.

Any vintage Pelikan is a wet writer. Actually mine is merely wet, and not as much of a firehose as most, thanks to the ministrations of my favorite nibmeister, Dan Smith. But a Lamy Safari is dry.  Not dry as dust, not as ungenerous and mingy as the alleged heart of Madame Defarge. But sparing with ink flow.

And those two pens really brought out different aspects of Diamine Gerbera. Here’s an example: the top half of this writing sample shows Diamine Gerbera from the vintage Pelikan with a thin medium nib; the bottom half is Gerbera in a Lamy Safari with a much broader 1.1 mm stub. The paper is Rhodia.

Here’s that writing sample head-on, first with the Pelikan, then the Safari.

Here is Diamine Gerbera on cream-colored Tomoe River paper, with the Safari first and the Pelikan second. 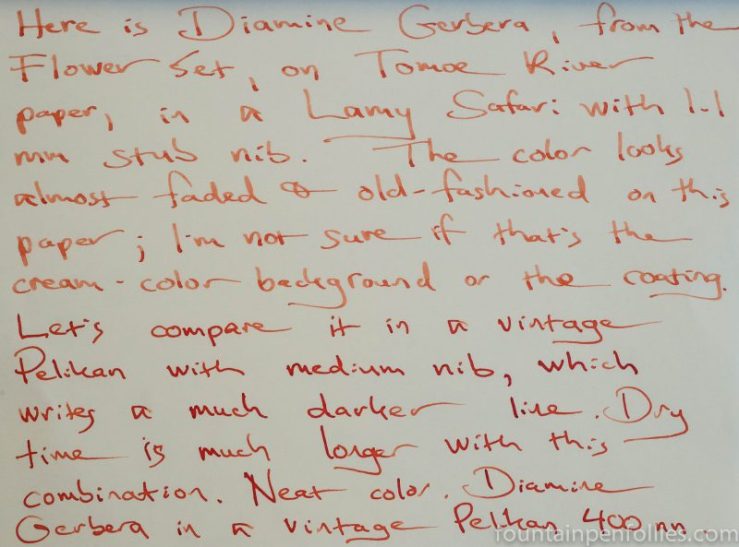 On both Rhodia and Tomoe River, Diamine Gerbera shades beautifully.

Opinions may vary, but to me, the color is tremendously appealing in the wetter Pelikan. I just love the darker, redder-looking orange of Gerbera in the Pelikan.

But what happens when you use the Pelikan with Diamine Gerbera on ordinary paper, instead of fountain-pen friendly paper? Well, the results are not as bad as hearing, “off with your head,” but they do make you think, “perhaps it’s time to sneak out of France.”

Because with the wet Pelikan on poor paper, I got feathering, I got showthrough and I got bleedthrough. Here it is on Staples Sustainable Earth, which is my everyday paper, and certainly not as bad as copy paper.

That’s not the worst feathering I’ve ever seen (I’m looking at you, Noodler’s Summer Tanager). But to me it’s about as appealing as having to marry Lucie Manette would be to an actual living person.

But wait, there is the Lamy Safari. And with that dry pen, even the 1.1 mm stub handled ordinary paper like a champ. Zero bleedthrough, only a small amount of showthrough and not enough feathering to matter to me.

But apart from the feathering issues from the Pelikan on poor paper, Diamine Gerbera behaved quite well in both pens. I never had an issue with startup or flow, even when I had left a pen unused for days. There was a little nib creep —  just a bit, hardly worth mentioning — but none of the crusty buildup on the feed that some Diamine orange inks are known for.

Does Diamine Gerbera clean up well? Yes, it does. It’s the Doctor Manette of inks, gentle and easy-going. I kept Gerbera inked for two full weeks, and it still cleaned up very quickly with just water.

Does it have any water resistance? Nearly none. It weakened and smudged even on absorbent copy paper, while on Rhodia it vanished like the Darnay family and Mr. Lorry from Paris.

As an ink, it’s hard to categorize for me, because it looks so different in the two types of pens. So here is the swab between Caran d’Ache Electric Orange, a bright standard orange, and Pilot Iroshizuku Yu-yake.

To me, it seems redder than both, but it’s closer to Yu-yake in value and feel.

And here is the paper towel chromatography.

I like that: two pinks and a bright yellow. That explains the lovely shading, as well as the easy cleanup. And I’m guessing the wetter Pelikan allows more of that bright pink to come to the fore.

So in sum, Diamine Gerbera is an ink that I really enjoyed. It’s a little wild and crazy in a wet pen, and a very appealing dark orange. But in a wet pen you are not going to get the best behavior on poor paper. (Just like Sydney Carton may make your heart beat faster, but he’s not going to make a good impression on your parents.)

Whereas, in a dry pen, Gerbera handles poor paper with aplomb, and acts perfectly, but the color is less vivacious and not as exciting. (The perfect gentleman, the unromantic Charles Darnay.)

I always like an ink that looks different in different pens, and Diamine Gerbera is one of those inks. It is part of the Flower Set, but Diamine also sells 30 ml refill bottles singly on its website.