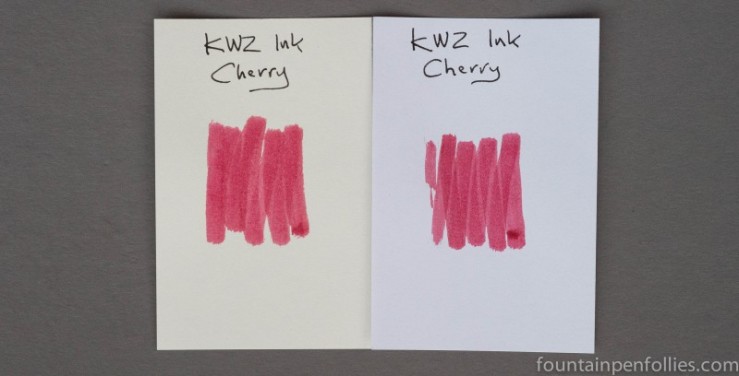 I used KWZ Cherry in a Lamy Safari with several nibs, mostly a medium, and in a Pelikan M600 with a broad Architect’s nib.  I found it to be a dry ink, with lower saturation, and I would recommend using it in a wetter pen.

KWZ Cherry is not a red that says “party all night!”  It’s a red that glides over, smiles and says, “care for a martini?”  It’s elegant and dignified.  It has awesome shading. 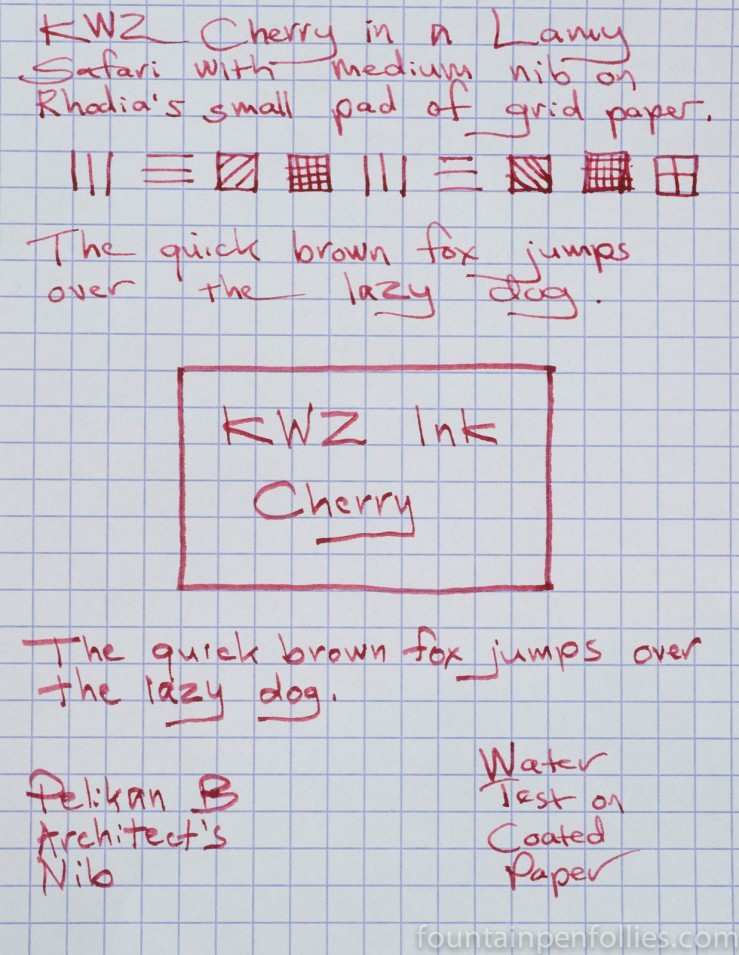 It is also a great ink for lower-quality paper.  I saw no feathering, not even on my “everything feathers” copy paper.  And I saw no showthrough or bleedthrough either, even with the Pelikan broad Architect’s Nib.  That behavior was really impressive. 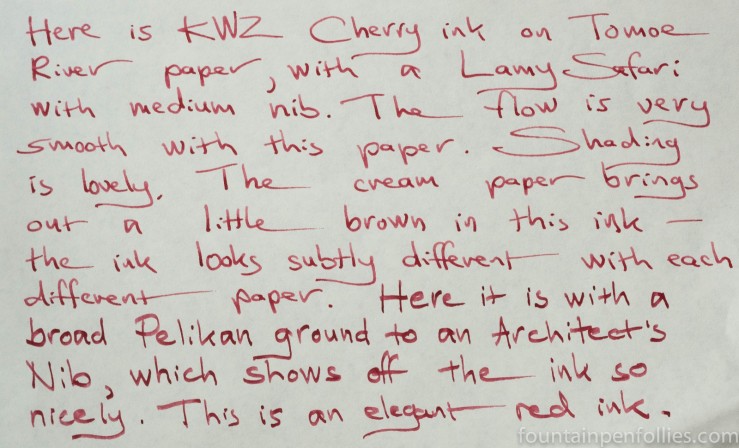 I used KWZ Cherry for more than a week, and alongside a number of other red and burgundy inks, and I have to say that KWZ Cherry feels red, rather than burgundy, to me.  It does not have that wine-like tint, or heaviness, that makes me think”burgundy.”  But you can see that KWZ Cherry isn’t a conventional red, either.

Here are swabs running from a lighter burgundy-red to more standard reds, to try to fit KWZ Cherry into the spectrum of reds. 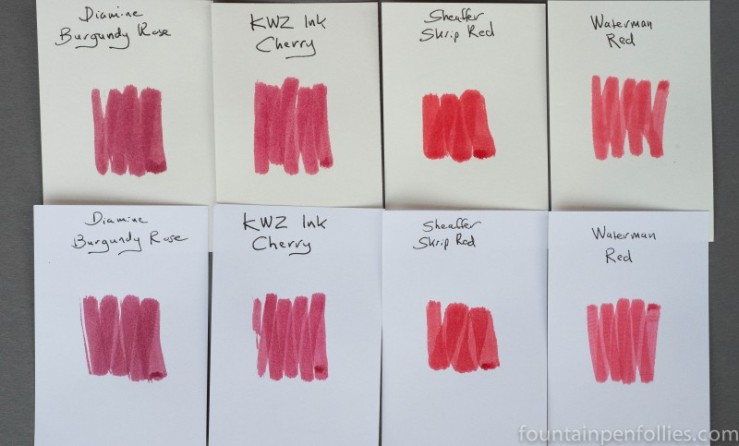 In that array above, KWZ Cherry looks very different than Sheaffer Skrip Red, which is my idea of a standard red.  KWZ Cherry does look similar to Diamine Burgundy Rose in those swabs, but not so much when you write with the two inks.

Even with swabs, when you isolate KWZ Cherry against Burgundy Rose and Montblanc Alfred Hitchcock, KWZ is redder and has a lighter feel. 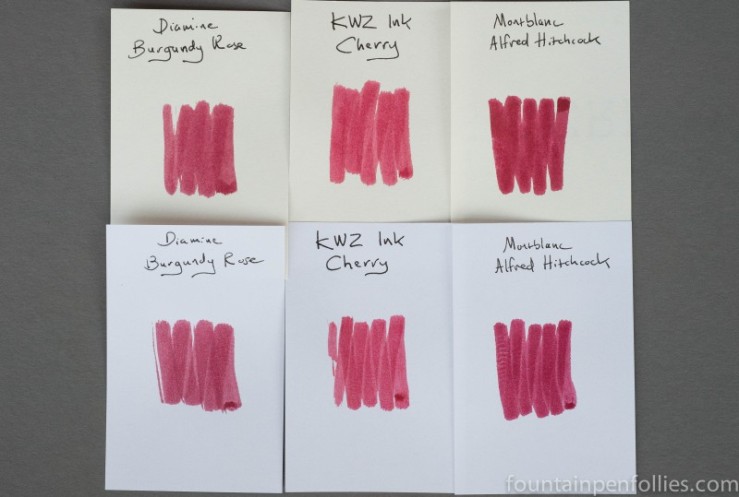 Paper towel chromatography of KWZ Cherry is below.  I see magentas and pinks, including a peachy pink. 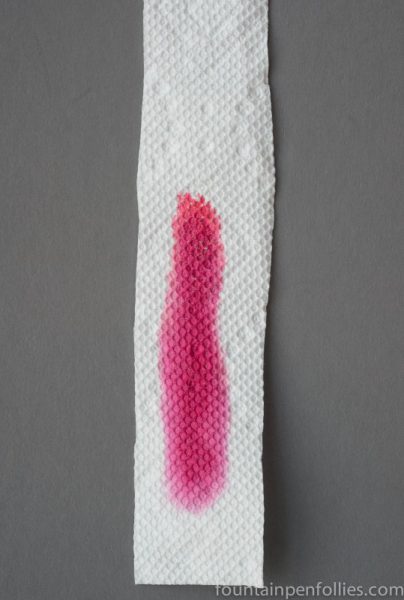 It’s interesting to see how complex KWZ Cherry is.  I think the array of similar dyes may account for why this is such an interesting red, and such a hard-to-pin-down red.

KWZ Cherry cleaned out tremendously easily for me with just plain water, which I appreciate in a red ink.  As you might expect, it isn’t particularly water-resistant. 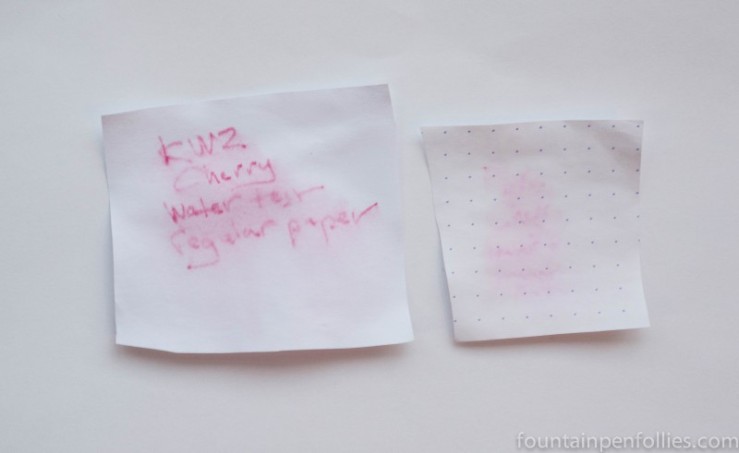 I received this sample of Cherry from KWZ Ink so I could review it.  KWZ Ink is available online from at least one US store and also directly from KWZ in Poland.  The Architect’s nib was borrowed from Dan Smith, the Nibsmith.