The Plaisir is a cigar-shape pen made of anodized aluminum in a range of colors. The design is nothing revolutionary, and some of the details aren’t great, but it’s nice-looking, especially for the price.

The Bali Citrus color was what made me buy mine. It’s a metallic chartreuse, similar to the color of the Lamy Al-Star Charged Green, and it’s a limited color for 2018.

But the Plaisir comes in a lot of other colors anyway. The range runs from conservative dark colors to pale pastels, meaning there’s probably an attractive color for everyone.

The thin anodized aluminum is sleek, which works with the cylindrical shape, while the knobby oversized cap band makes a nice contrast with the streamlined shape. Sure, the fit and finish is basic, and the clip is, too. But I think the Plaisir makes a better overall impression than many pens in this price category.

2. Construction and Quality. A little flimsy, except for the cap, which is stubborn.

The nib and section are lifted from the Preppy, but on the plus side, at least it’s the later version of the Preppy, so the nib and feed are not in candy colors. The Plaisir feed is gray. The nib is silver-colored, and quite small.

The cap is not my favorite part of the Plaisir. It’s a snap-cap, but it takes me more effort than I’d expect to uncap. In fact, uncapping turns into something of a challenge. To uncap it, I need to firmly grip the barrel at the capband and push up with my thumb. Often when I do that I end up inadvertently loosening the pen barrel and section, which I then need to twist closed before writing.

That’s a lot to go through to uncap a pen.

It’s on purpose, though. Platinum trumpets the cap’s “slip and seal” cap design, which supposedly keeps the ink from drying out. And, after wrestling with the cap, I’m here to tell you: no ink would dare step out of line.

Of course the Plaisir is cheaper than the Al-Star. But while you’d expect an Al-Star to feel solid when it retails in the US for $35, I’m not sure that one should expect a Plaisir to feel not-so-solid, just because it retails for less than $20.

Still, the Plaisir seems well-enough made for a $14 pen.

The Plaisir is not short, but it’s lighter than it looks. This is especially true if one doesn’t post pens when writing. Unposted, the Plaisir weights a mere 9.6 grams.

That’s a bit light, but close to comparable pens. The Lamy Al-Star pen body weighs 11.7 grams (with ink cartridge), and the capped or posted Al-Star weighs 21.3 grams. The Kaweco Classic Sport (the plastic model) is a mini-pen meant to be used posted, and posted it weighs about 10.3 grams (with converter). The Pilot Petit is another mini-pen that has to be posted, and weighs 10.2 grams (with cartridge) posted.

The Plaisir is closest in weight to the Lamy Safari. The Safari pen body weighs about 10 grams (with converter) uposted, or 17.3 grams capped or posted.

A pen I don’t own is the Pilot Metropolitan, which is a similar size but significantly heavier. The Metropolitan pen body weighs about 17 grams on its own, and the capped or posted Metropolitan weighs a hefty 26 grams.

The Plaisir grip is comfortable. The section is cylindrical, and fairly long, and the step-down from the barrel is minor, and nearly unnoticeable unless you rest your fingers right there.

It’s a little light for perfect comfort for longer writing sessions, at least for me, but most people will get around that by posting it. There’s one other thing I noticed: I tend to grip my pens lower down the section, and closer to the nib. But the nib on the Plaisir is very short (shorter than the Safari nib, or the nib on the Pilot Petit), so if I do that, my hand is closer to the paper surface, and thus a little cramped. Once I figured this out, I started holding the Plaisir further up the section.

All in all, the Plaisir is a lightweight pen that, either posted or unposted, should be a comfortable size for most people.

4. Nib and Performance. In line with expectations.

Unfortunately, I bought the fine nib.

So, okay, that’s a joke, but there is a grain of truth in it. My Platinum Plaisir fine nib writes nice, standard fine line, but on the scale of a European fine nib. In fact it writes just about the same width as the fine nib on my Kaweco Sport.

Generally, I expect a Japanese nib to be approximately one size narrower than a European nib of the same width. So the Plaisir fine is wider than I expected. I’d have been happier with an extra-fine nib on the Plaisir. But I only see it offered with fine or medium nibs.

If I were to guess why the Plaisir fine nib is wider than a typical Japanese fine nib, I’d guess it’s probably made in a factory that makes nibs for multiple pen companies.

Because it’s the Preppy nib, people will be familiar with the Plaisir nib as a writer. It’s firm, and tough, as a nail. It’s not going to inspire flights of fanciful appreciation. It’s a standard nib, as one would expect on an inexpensive fountain pen. It’s not the best cheap nib I’ve ever used, and it’s not the worst.

But it is a very easy nib to write with. The fine nib has a nice big sweet spot, and I was able to write from any crazy angle, which is encouraging to beginners. The wider fine is a size a lot of people like. Mine is inked with a cartridge of Platinum Carbon Black, which is a lubricated and wet-writing ink, and there’s a lot of ink flow. For the average new fountain pen user, this will be a steady and trouble-free performer.

For a more advanced fountain pen user, it’s perfectly usable, though it won’t make you forget your Montblanc or your Sailor fine or even your Pilot Prera fine. But that’s okay. The nib works. The pen has other strengths.

The Plaisir uses Platinum ink cartridges or a converter. You can buy a Platinum converter to use bottled ink, but the converter will add $6.50 to $8.25 to the pen’s price, depending on where you buy it.

I prefer a cartridge/converter system, for ease of use and ease of maintenance, though a proprietary c/c system can be a little frustrating, because it adds to the expense of the pen and decreases the versatility.

I was lucky, though: not only do I already own a Platinum converter, but buying the Plaisir let me use my cartridges of Platinum Carbon Black ink, one of the few pigment inks I really love.

I bought my Plaisir in Bali Citrus from Jetpens, for a little over $14. Prices vary on the Plaisir. A more careful shopper would have found it available at Amazon for as low as $10, but only in other colors, and often shipped from Japan. You could also buy the Plaisir from a range of other sellers at different prices. I saw it in other colors at Vanness Pen Shop, a US dealer,  for $22. Even at $22 it’s decently priced.

If you don’t have Platinum cartridges or a converter, and you have to add those, you can set yourself up with the Plaisir and a converter or box of cartridges for $20 to $30. That compares pretty well with other low-priced pens.

The Pilot Metropolitan will cost you $18.50, with a very basic converter included. Now, I don’t enjoy the Metropolitan: I find it uncomfortable, because it’s heavy and has an irritating step-down section. But it’s popular, and it’s not expensive. And I like the nibs. The Metropolitan fine nib is a Japanese fine, and a good one.

The Kaweco Classic Sport costs between $20 and $25, before you add a converter and, if you like, a clip. I like the Kaweco Sport, and its nibs, but it is a mini-pen, and that’s not to everyone’s taste. It does have the option of an extra-fine nib.

I did a blog about starter pens last year which basically made the argument that a starter pen for a newbie shouldn’t be too basic, or too cheap, lest a newbie be turned off fountain pens. I hadn’t tried the Plaisir at that point, but I put it in my “maybe” category, thinking it might make a good starter pen. Now that I own a Plaisir, I think that hunch was correct. It would be a good starter pen.

It’s decent-looking, and comes in a wide choice of attractive colors. The nib is newbie-friendly. I think the size has a good chance of working for most fountain pen users, posted or unposted.

You’d have to spend more for a Lamy Safari or Vista, or a TWSBI Eco, and even more for a Lamy Al-Star. I think those other pens do, subjectively, feel more substantial, and they do offer a wider choice of nibs. But they aren’t perfect either. The Plaisir is a worthy alternative to throw in the mix.

The Plaisir is also a good option for an inexpensive carry-around pen, or a pen for high-maintenance inks (like Platinum Carbon Black). I think for people who own more pens, the biggest drawback may be the limited choice of nibs.

For me, though, the best part is still the Bali Citrus color. I love that. I firmly believe a pen you like the looks of will be a pen you enjoy using. That’s important for a starter fountain pen, or any fountain pen. 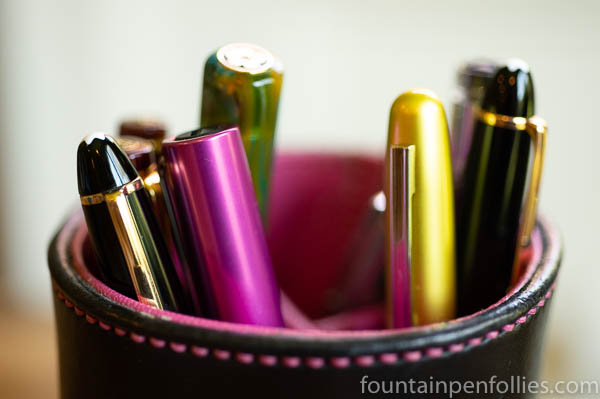