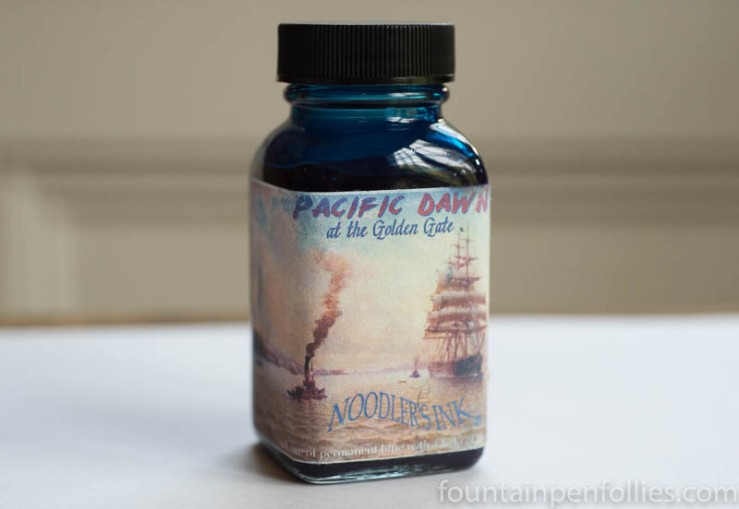 My friend surprised me with this ink, which was lovely. I used to live in the Bay Area and have a strong sentimental attachment. Nathan Tardif of Noodler’s states that the ink “is an attempt to depict San Francisco Bay in a fountain pen ink. The bay is often a deep and dark blue, and briefly is surrounded by the red of the dawn which is enhanced by the color of the bay bridge.” I mean, that’s more poetic than accurate, but a nice sentiment. And what a beautiful label on that ink bottle.

As an ink, Pacific Dawn at the Golden Gate is a blue or even blue-black color. It seems darker and greener when wet, and when it dries down it becomes more gray. It’s complex. 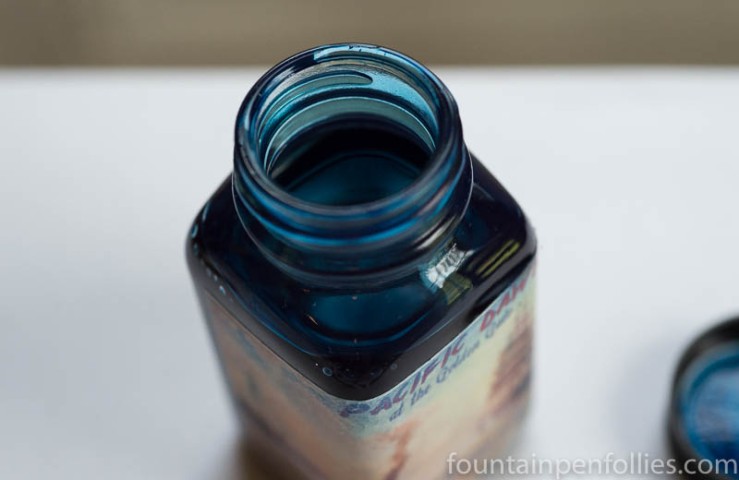 But on paper, it is more muted than you expect. 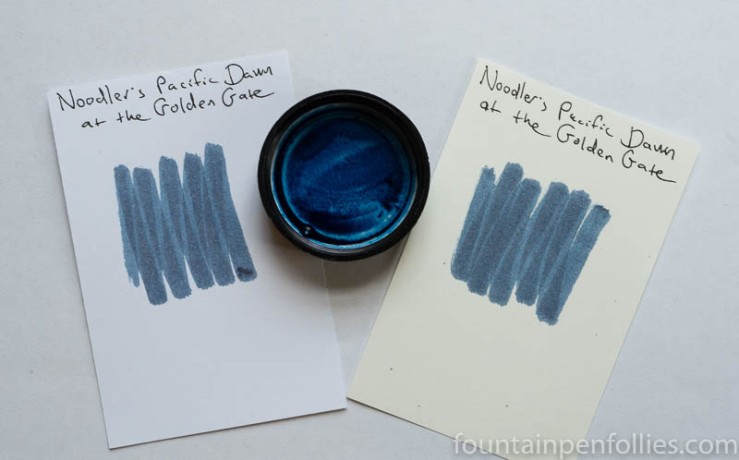 Nathan’s words suggest that there is a red dye in Pacific Dawn at the Golden Gate. It’s not really red, but we’ll go into that later. However, since Nathan and Straits Pen both speak of red, I’m calling that dye reddish.

The reddish dye is interesting. If you get Pacific Dawn at the Golden Gate on your fingers, the reddish part will be hard to wash off. (Ask me how I know.) But on paper, the red will run off first.

I have to say that the ink doesn’t usually look, when you write with it, like an ink with a reddish dye component.

It looks like a greenish blue-black ink to me.

Nathan says that “At the paper fiber level one can see the borders of the line and many high points of the paper structure that are red.” And I believe him. And with some pens and papers, you may be able to see a reddish border. I only used a Lamy Al-Star. Still, I thought I saw something reddish, sometimes Then I looked again, and didn’t.

With a red dye, I would have expected sheen, but Pacific Dawn at the Golden Gate was not a sheening ink for me. Again, though, I only used a Lamy Al-Star.

Well, some mysteries can be revealed later. For now, let’s appreciate the very nice shading of Pacific Dawn at the Golden Gate on fountain-pen friendly Tomoe River paper. Here’s a closeup.

Shading was also gorgeous on Rhodia.

A larger writing sample shows the color of Pacific Dawn at the Golden Gate on Rhodia on this whiter paper.

Ink flow was interesting. When I first inked Pacific Dawn at the Golden Gate in my Lamy Al-Star, I used a broad nib, because I really wanted to see its color. That lasted exactly one sentence. The ink was so wet that, while the color was very dark, I had feathering on Clairefontaine paper. I have never seen that with any ink. And the Al-Star is a dry-writing pen. So I swapped out the broad nib, and thereafter only used a fine nib that had been stubbed for me by Pendleton Brown.

That’s also why I haven’t yet tried Pacific Dawn at the Golden Gate in a second pen or with a broader nib. I wasn’t able to figure out a pen I have that’s dry enough for it. Because it was still a very wet ink with the fine nib. And nib creep never went away — not that I mind that.

But an interesting thing happened. The ink never dried out in the pen, but as the days went by, and the level of ink remaining in the converter declined, and the feed became less saturated with ink, Pacific Dawn at the Golden Gate didn’t seem as incredibly wet. So I suspect that one could use this ink in a wetter pen, perhaps by filling the converter or pen body directly, rather than through the nib and feed. I think diluting the ink would be another tactic.

The ink still tended to feather for me. Even with the fine stub, here is feathering on Rhodia, which is not a paper that feathers.

I actually liked this ink’s behavior on lower quality paper. On my everyday Staples Sustainable Earth paper, the shading decreased, but the ink was a consistent slate blue in color, which was very pleasant and almost soft. On this paper, with the fine stub, I thought the feathering stayed in check enough.

Here is a writing sample on Sustainable Earth that shows Pacific Dawn at the Golden Gate with a blue black ink, a blue ink and a black ink, for comparison.

That greenish tint of Pacific Dawn at the Golden Gate really shows when you compare it to other blue and blue black inks.

I actually don’t have a lot of inks that are grayish, greenish blue blacks. I found a couple that are in the neighborhood.

Pelikan Edelstein Tanzanite is a darker, more straightforward and less complex blue black, especially when you see it in a pen. It’s also on the dry side. KWZ Iron Gall Blue #2 has the gray blue-black tone of Pacific Dawn at the Golden Gate, but is not so extremely wet, and it works nicely in a range of pens. It’s also more blue.

I think when you look at those comparison swabs, there’s something more complex about Pacific Dawn at the Golden Gate. And you see its different tint even in the swabs.

Pacific Dawn at the Golden Gate is said to be “bulletproof,” and I’m not expert enough to know those specific characteristics. But this is essentially a waterproof ink. 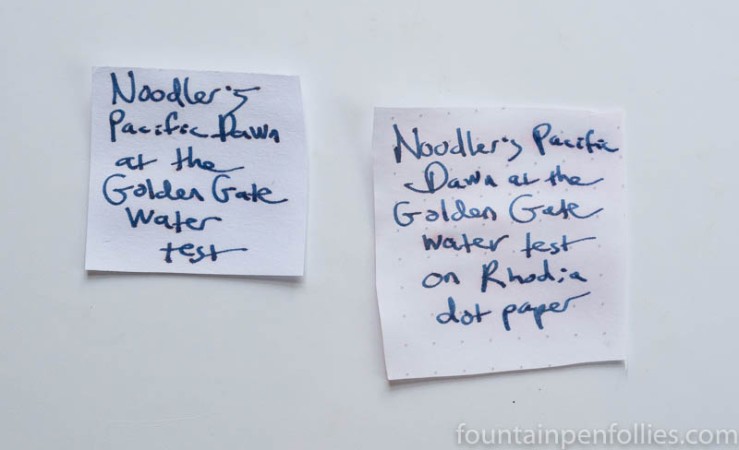 You can see that the writing is perfectly legible after exposure to water, on both smooth Rhodia paper and regular, absorbent paper. The red dye did run off the Rhodia, leaving a halo effect that doesn’t affect legibility.

However, Pacific Dawn at the Golden Gate was very easy to wash out of my Lamy Al-Star. I kept it in my Al-Star for 12 days, and it cleaned out as easily as Waterman Serenity Blue. I love that. 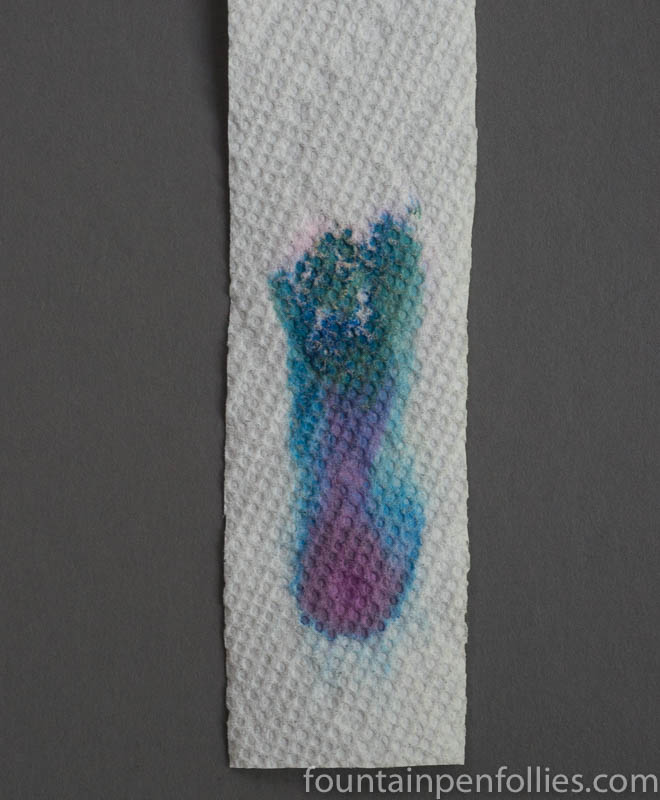 So, that’s why I say that the “Golden Gate” dye is reddish rather than red. There’s a purplish dye in this mixture, and you can see a pinkish halo on top.

This chroma solved a few mysteries for me. I could not figure out how you’d put red into a greenish blue-black. You do it by using a light, pinky purple. And I suspect that’s also why I never got red sheen or even red borders once the ink dried. I also think the complex mixture explains the grayed-down color of the ink as it dries.

In any case, it’s a neat dye mixture, very creative. Pacific Dawn at the Golden Gate is an interesting ink — not necessarily an easy ink for me to find the perfect pen for. But it has a subtle color. It is waterproof but also easy to clean. It’s very wet, at least at first, but maybe a better pen match will tame that. Or maybe diluting it would help.

One thought on “Ink Review: Noodler’s Pacific Dawn at the Golden Gate”