I’m used to KWZ inks varying from their names sometimes — that’s part of the charm of this inventive and interesting ink company. Thus KWZ Dark Brown is so dark a brown as to be, in effect, a light black, and KWZ Brown-Pink manages to look brown pink, but also kind of purple.

However, KWZ Iron Gall Orange is even more mind-bending: it never really looks orange.  Perhaps that’s because of the iron gall component, which often affects an ink’s color. Iron gall also provides water resistance. And it can make an ink higher maintenance. However, I’ve used iron gall inks for years, and I love them for the shading and how well they do on poor paper.

I used KWZ Iron Gall Orange for three weeks in a Kaweco Classic Sport with broad nib, and in a Lamy Safari with fine nib, both converter pens. Here is a writing sample on white Rhodia paper.

And here is closer look.

And here it is on my “regular paper,” Staples Sustainable Earth, to see how it looks on paper that isn’t fountain-pen friendly.

KWZ Iron Gall Orange behaves very well on poor paper, as iron gall inks tend to. I had no feathering, bleedthrough or showthrough on the Staples paper, even from the Kaweco with broad nib.

In the Kaweco Sport I saw no hesitation in startup or flow with the ink, even after it had been left unused for a week. After the same week off, the dry-writing Safari only needed to be turned nib-down for a bit; otherwise it was perfect.

As an iron gall ink, it’s not surprising that KWZ Iron Gall Orange has excellent water resistance on both regular paper and smooth Rhodia. The orange dye washes away to an extent, but a very legible line remains.

Now we get to the surprising part of KWZ Iron Gall Orange, at least for me. This is the first KWZ iron gall that I have tried that was challenging to clean from a pen.

Here is the converter of my Safari after more than three weeks filled with Iron Gall Orage. Some of the ink has slipped behind the piston. 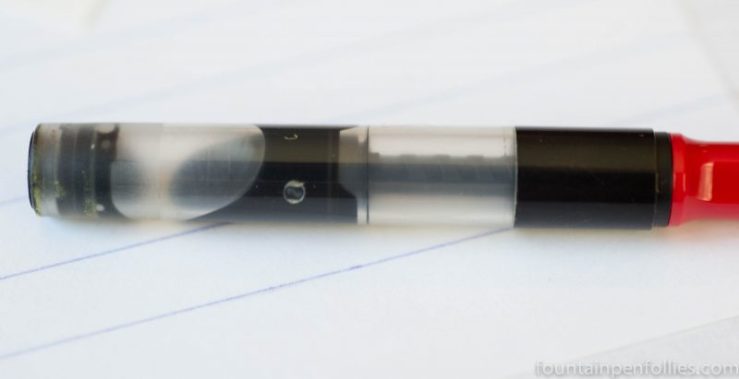 So, it’s a nicely lubricated ink, yes. But that’s not the kind of ink flow anyone wants to see, and I did have to disassemble the Safari converter to fully clean it. Now, possibly it’s a converter problem that has just developed, not an ink issue. And I’ve seen this in the past with other converters and other inks.

But here is the old-style squeeze converter of my Kaweco Sport after I had cleaned out KWZ Iron Gall Orange by flushing and soaking with water.

You can see some black residue that has clung to the plastic nose and to the sac. I could not remove that with soaking or flushing cycles.

I went to my high-tech secret weapon. The pipe cleaner.

Now it’s all clean — that gray-looking ring just behind the metal is just clear water.

I saw the same residue in the Safari converter in the area between the converter wall and the plastic opening. After I removed the plastic bit, that was easy to rub off with just a paper towel.

To me the extra cleanup required of KWZ Iron Gall Orange in these two converters does suggest caution when selecting a pen. I would choose a pen that gives easy access to whatever holds the ink, in case flushing and soaking isn’t enough. Actually, it was because the ink in the sample vial seemed a little dense that I chose two converter pens, and I am glad I did.

However, note that I had the pens filled for more than three weeks, and there was one week I didn’t write with them. That might have contributed to the buildup. Also, I only saw an issue with the converters; the ink seemed to flush out easily from the nibs and feeds, and the stainless steel nibs showed no effect. And after all it is a water-resistant ink, which often means more cleanup.

Other than that, what really stands out for me about KWZ Iron Gall Orange is the color. It has an unusual tint.

In some ways KWZ Iron Gall Orange reminds me of brass — but unpolished, aged brass. But it also seems vegetal — like something you would come across near a pond or swamp. 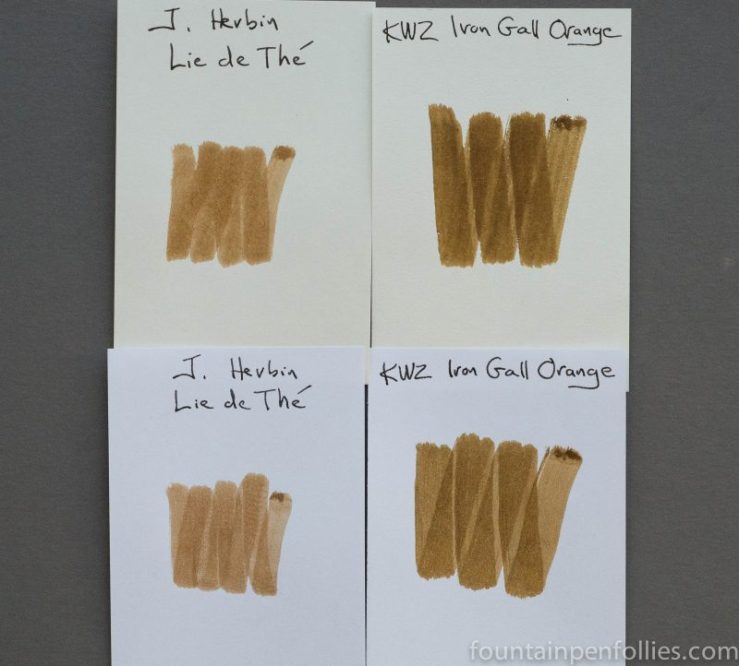 Lie de Thé, while a golden brown of similar value, is browner. KWZ Iron Gall Orange has a muddier hue and a different tint.

Just for fun, here’s an orange ink next to KWZ Iron Gall Orange.

So, yeah. Not a classic orange, that KWZ Iron Gall Orange.

So this really is complex ink. Also interesting, and unusual, right down to the chromatography. And I found the black stuff from the converter. That looks like it could just be dye.

KWZ Ink is available online from at least one US store and also directly from KWZ in Poland.  KWZ’s website contains excellent information about using and cleaning out iron gall inks.